HAVANA, Oct. 19th Cuba has signed up to an energy cooperation pact with China, solidifying relations at a time when the US has been cautioning against the Asian giant’s growing influence in the region.

Chinese companies will be invited to upgrade Cuba’s ageing energy sector. The financing for the project is expected to be backed by the Chinese government.

The announcement comes as the Biden administration attempts to convince countries in Latin America to turn away from China’s Belt and Road trade and public works programme, which critics say traps recipients in unsustainable debt, while providing Beijing raw materials and geopolitical leverage for decades to come.

At a conference of the “Belt and Road energy partnership”, held in Qingdao, a delegation from Cuba said it would “deepen ties” between the two countries. Cuba’s industry minister, Liván Arronte Cruz, said the pact would “promote solidarity and international co-operations in favour of developing countries”. Green technologies will be prioritised, the minister said.

The other countries in the region which have signed up to the broad Chinese cooperation agreement are Bolivia, Suriname, and Venezuela, all of which have left-wing governments.

Over the past 15 years, China has become the biggest trading partner for most of the big economies in Latin America, overtaking the United States. More recently, China has spent billions of dollars buying up several key energy companies in the region, including the largest electrical company in Peru.

Earlier this month, President Biden’s deputy national security adviser Daleep Singh visited Colombia, Ecuador and Panama, all of which have conservative governments, as part of a pitch for US-backed infrastructure funding, called “Build Back Better World”.

US officials say the so-far undefined projects on offer will be built to higher environmental and labour standards than that China is financing, with full transparency for the terms, in contrast to Beijing’s secrecy. 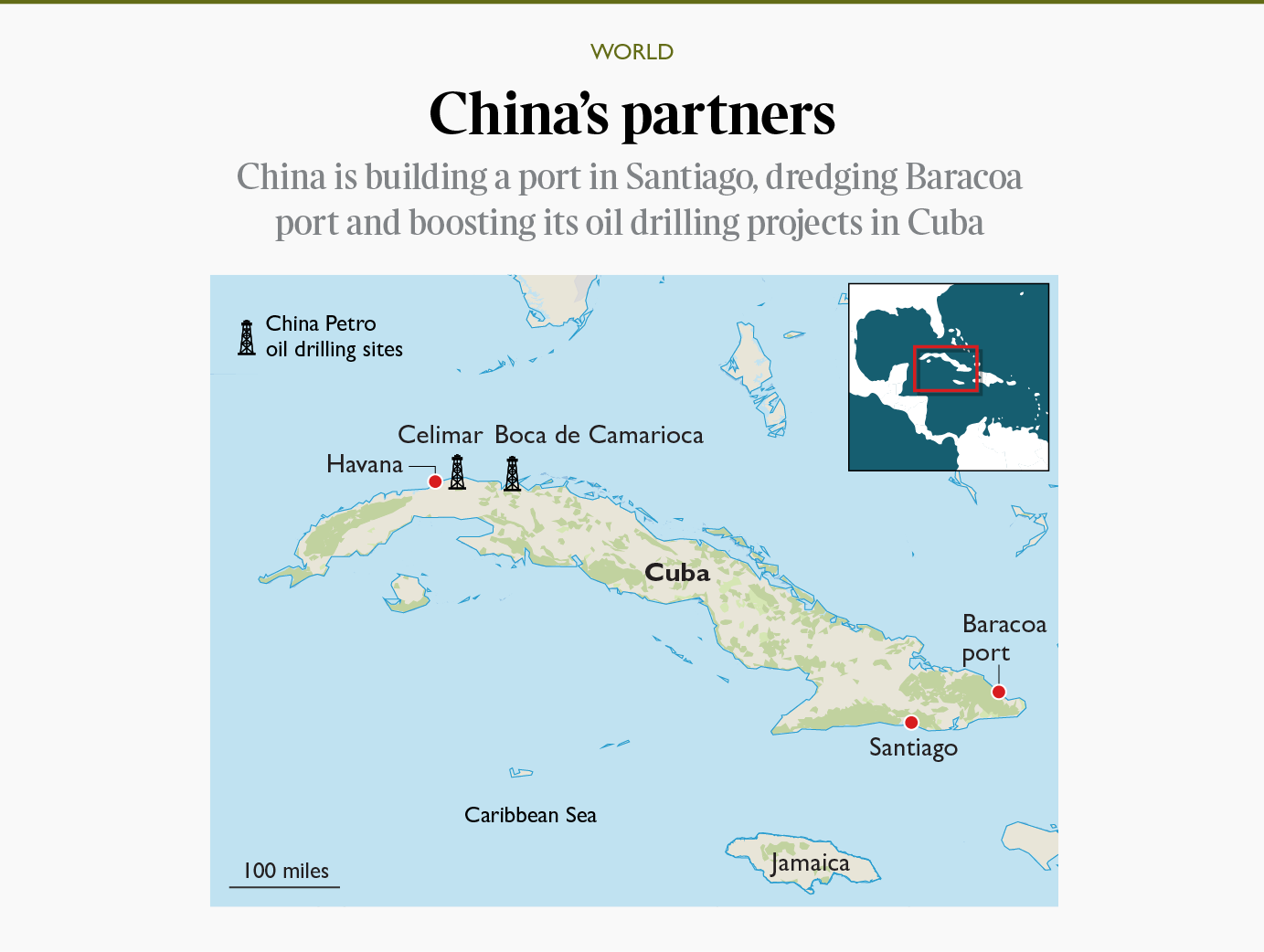 Singh however has insisted that Washington is not asking the region to make a stark choice between the US and China. “We’re there to compete because we do think we have a better product,” he told the Financial Times.

China’s arrangement with Cuba, a political ally and one of the smallest economies in the region, is not seen as likely to trouble the Biden administration, given it maintains the US’s decades-old embargo on the communist island, prohibiting most American companies from doing any business with its ruling regime.

But it is seen as symbolic of Beijing’s increased clout at the doorstep of the United States.

Already Cuba is China’s largest trading partner in the Caribbean. China is helping Cuba build a modernised port in the city of Santiago, as well as undertaking dredging operations, and setting up wind and solar farms.

ChinaPetro, the state oil conglomerate, is running drilling rigs in Celimar and Boca de Camarloca. China’s direct investments in Cuba reached $149 million at the end of 2019.

President Xi last visited Cuba in 2014, when he met the former dictator of the island Fidel Castro. “The common dream and pursuits have brought China and Latin America closely together,” he told a conference later. “Let’s seize the opportunity, work hard, advance hand-in-hand and create a beautiful future for the China-Latin America relations”, he said.

Others suspect more nefarious aims, and there are suspicions that Beijing bases some of its regional intelligence on the island. US media reports have claimed a Soviet-era signals station near Havana is operated by China to intercept communications in the US.

Any further help China can offer to improve the Cuban energy network will be welcomed by its communist leadership. Electrical blackouts since June have fuelled discontent, which in July broke out into street protests, the largest seen since the 1959 revolution.

Following those protests, after the US sanctioned Cuba’s national-revolutionary police and its top two officials, China said: “The recent US sanctions against Cuban institutions and officials severely violate the basic norms governing international relations.” (www.thetimes.co.uk)

Flights from Cancun to Havana, a fast option to travel to CubaBritish sailboat is first of its kind to dock in Havana’s bay during pand...
Scroll to top