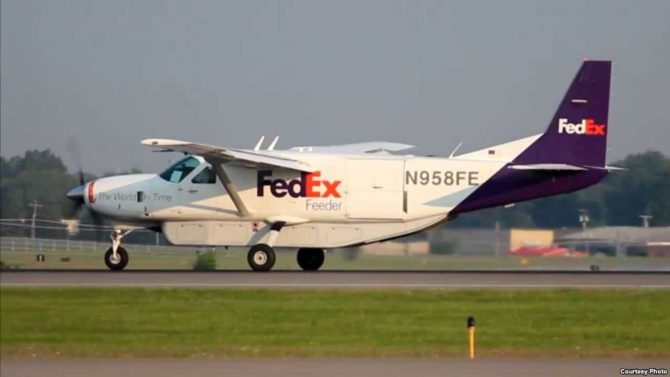 The express delivery giant dropped its bid to operate to Cuba’s capital and is now requesting U.S. regulatory clearance to fly five times a week between Miami and the smaller resort town of Varadero in the province of Matanzas.

In a downsizing of its near-term ambitions, the company also said it would use a Cessna 208 aircraft, which is far smaller than the Boeing 757 it initially proposed for the Miami-Havana route.

Using Varadero as the base for FedEx’s initial operations “would be the more optimal use of its resources under current Cuba marketplace conditions,” it added in the amended application.

A company spokeswoman declined Friday to elaborate on those market conditions or the reason behind the changes. The company reiterated its “strong interest’’ in providing all-cargo transportation service between the countries.

Get the latest logistics and supply chain news and analysis via an email newsletter. Sign up here.
The decision comes amid heated competition for U.S. passenger flight routes to Havana. The Transportation Department last week awarded six U.S. airlines rights to secondary Cuban airports but said it would wait until the summer to apportion flights to the capital after receiving three times more requests than the 20 available daily slots.

The company requested a start date of Jan. 15, 2017 in Thursday’s amended application, citing “the complexities of setting up operations in Cuba with ground and customs clearance capabilities.”

That is later than U.S. passenger airlines plan to arrive on the island nation. American Airlines Group Inc., the largest U.S. airline by traffic, said this week its first Cuban-bound flights will depart Sept. 7 to Cienfuegos and Holguin.

FedEx noted in the amended application that it remains the only all-cargo applicant for U.S.-Cuba scheduled air services. The shift in planned operations, however, suggests tourism, not trade, will take off sooner as the U.S. loosens decades-long travel restrictions to Cuba.

“UPS continues to assess the opportunity to provide services to and from Cuba. As trade lanes open and demand for delivery services increases, UPS will take appropriate action to meet the needs of our global customers,” it added in a statement.

In Cuba, an underground network armed with USB drives does the work of Google and Youtube