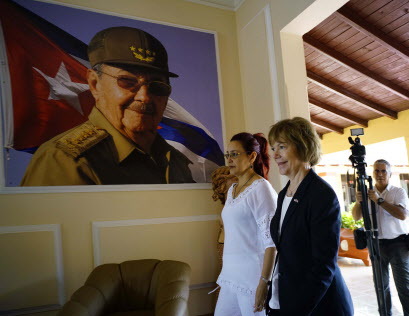 HAVANA, June 25th 35th Minnesota does little in the way of trade with Cuba, but Lt. Gov. Tina Smith believes last week’s trade mission to the island is likely to change that.

Smith spent much of last week touring Cuba with a group of state officials and agriculture leaders from around Minnesota, looking to build a new network for exporting crops like corn, soybeans and poultry. The trip was the first by a U.S. state government official since President Donald Trump announced that he would roll back some of the Obama administration’s moves to open up trade and travel with Cuba.

Speaking to reporters on a call from Cuba, Smith and some of the other trip participants said the island nation is importing food from countries much farther away than the U.S., and they believe there’s a significant opening for Minnesotans to do business.

“There is a need for trade here in Cuba,” said Harold Wolle, president of the Minnesota Corn Growers Association. “They don’t grow much corn. They can use our corn, and they need high-protein feed supplements.”

Smith said the trip by the group, which also included state Sen. Julie Rosen, R-Vernon Center, and state Agriculture Commissioner Dave Frederickson, did not yield any specific trade agreements with Minnesota. But she believes it was an important first step for a state that previously wasn’t on many Cubans’ radar.

“I think it was important that we came at exactly this time,” Smith said. “Following on the heels of the president’s comments allowed us to reinforce the importance of these relationships.”