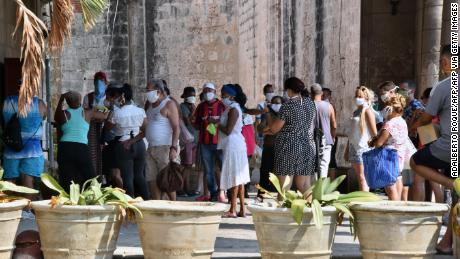 HAVANA, May 4th A COVID-19 transmission event at a homeless center triggered the daily count of new coronavirus infections in Havana and, consequently, in Cuba, where a new record of 74 positive cases was reported in one day.

Of the 74 patients―all Cubans―58 cases are related to an outbreak of the virus in a social home that cares for homeless people, among other groups, located in the Havana municipality of Cotorro, said Dr. Francisco Durán, director of the epidemiology of the Ministry of Public Health (MINSAP), in the televised daily report.

This Friday, another 14 new positive cases and one deceased linked to this social center had already been reported.

The 58 patients related to this site announced this Saturday by the MINSAP, are men and are between 48 and 84 years old. More than half (32) are over 60.

According to Dr. Carlos Alberto Martínez, provincial director of health in Havana, none of them belongs to other open events in places where a greater number of cases were concentrated in the island’s capital.

This Saturday, the Provincial Defense Council “analyzed the characteristics and measures applied to these patients,” reported the newspaper Tribuna de La Habana, without giving further details.

Out of the cases registered by this event, Cuba’s largest city registered at the end of this Friday another 6 cases: 4 in Centro Habana municipality―one of the most affected territories in the city―and one in Cerro and San Miguel del Padrón, respectively.

The Cotorro one would be, together with an outbreak in a home for the elderly in the central city of Santa Clara, one of the largest local coronavirus transmission events to date in Cuba.

With the new outbreak, Havana already has 739 COVID-19 positive cases and is reaffirmed as the epicentre of the epidemic in the country.

Cases in the Cuban capital, home to around 1.2 of the island’s 11.2 million inhabitants, represent more than a third of the national total of those infected with the new coronavirus.

Although in Havana, as in the rest of the country, mandatory general confinement and night curfew have not yet been decreed, the isolation conditions have been reinforced in specific areas of the city where the main sources of contagion have been detected.