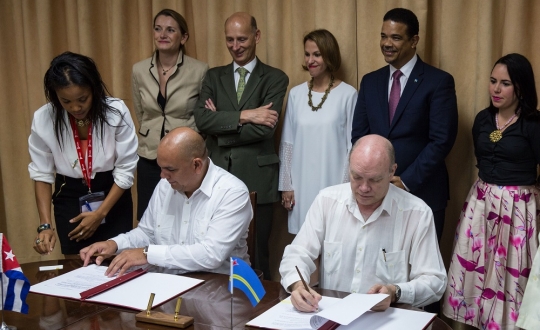 “Last week in Havana, Cuba, the governments of Aruba and Cuba signed a cooperative agreement with a focus on tourism,” announced Minister of Tourism, Transportation, Culture and the Primary Sector for Aruba Mr. Otmar Oduber.

HAVANA, May 9th It’s been close to a year since discussions began between the departments of foreign affairs of both countries, and are now continued with this official visit from Minister Oduber and a delegation consisting of the director of the Aruba Tourism Authority, Mrs. Ronella Tjin Asjoe-Croes, director of the Department of Foreign Affairs, Mr. Edwin Abath, advisors to the minister and executives from the Aruba Tourism Authority, among others.

During the visit, the delegation spoke with the government official overseeing tourism, the Vice Minister of Transportation for Cuba Mrs. Naima Alfonso Acosta on the potential to create a route for cruise ships specifically between these two countries, as well as other countries in the southernmost region of the Caribbean.

The initial discussions with the head of tourism began months back. The topics of interest they will continue to focus on include a Dual Destination Program and the strengthening of knowledge in the fields of managing cruise facilities, inclusive of marketing strategies to attract visitors.

These initiatives will be driven through job platforms between the two countries. There is interest on Cuba’s part to exchange knowledge with Aruba based on Aruba’s storied success in the field of managing strategies and cruise facilities.

Cuba is also interested in Aruba’s experiences in the field of timeshare as well as new law proposals in respect to the management of accomodation. Aside from the topics of tourism and transportation, agriculture and culture were high on the agenda during the Minister Oduber’s visit to Havana.

On Wednesday, the official ceremony took place to endorse the ground-breaking agreement, which was signed by the Minister of Foreign Trade and Foreign Investment for Cuba Mr. Rodrigo Malmierca, and Minister of Tourism, Transportation, Culture and Primary Sector for Aruba Mr. Otmar Oduber.”

Aruba sees Cuba as a new destination, despite its existence for some time now,” Minister Oduber explained, “and it will soon see organizational changes that will contribute to making the country a more attractive destination to explore from the U.S. market. This memorandum of understanding will align us with the new possibilities that this could bring for Aruba,” Minister Oduber concluded.