HAVANA, July  8  Officials at Caribbean tourist destinations popular with Americans have been up in arms over the budding relationship between Washington and Havana. Opening the island to American tourists, the officials say, would decimate tourism-dependent economies in places like cash-strapped Puerto Rico.

They now have even more reason for worry.

On Tuesday, Carnival Cruise Lines said that it was trying to get the Cuban government’s permission to host cruises leaving from Miami then sailing to the island nation 90 miles south. If it can convince Cuban President Raúl Castro to allow the trips, Carnival would be the first American cruise company to visit Cuba since the 1960 trade embargo. The trips wouldreportedly cost around $3,000 per person, and the company hopes to start the voyages in May 2017.

Last week, Frank Comito, CEO of the Caribbean Hotel & Tourism Association, began a push for the Caribbean Basin Tourism Initiative, meant to boost U.S. travel to destinations in the region that aren’t Cuba.

“If we continue to operate business as usual, and we all draw from the same pie, and Cuba is in the equation … there will be serious economic and employment consequences,” Comito told the Associated Press.

Since announcing the renewal of diplomatic ties, the number of American tourists planning to travel to Cuba exploded. According to a March report in the New York Times, bookings jumped 57 percent for one tour operator in January. In February, they increased 187 percent. In March, they went up nearly 250 percent.

The challenge Cuban tourism presents to its neighbors has been on full display in recent days. Puerto Rico, an American commonwealth that relied on tourism for 7 percent of its gross national product in 2009, admitted it was on the verge of bankruptcy. Pleas for assistance from the White House and Congress fell on deaf ears.

San Juan insists tourism is a key part of its plan to reinvent its economy. A rival about 900 miles closer complicates this strategy.

“We’re going to have to develop some sort of credible strategy to deal with lack of economic growth,” Sergio Marxuach, policy director at Center for the New Economy in San Juan, told Foreign Policy in a recent interview. “Well-thought economic growth — that’s the most difficult thing.”

Cuba needs the money just as much as its neighbors. Tourism generates about $2.6 billion a year; annual GDP there was about $77.15 billion in 2013.

The coming arrival of American tourists harkens back to a dark chapter in Cuban history. With the blessing of the island’s leadership, American crime families set up gambling operations on the island in the 1920s and 1930s. (For a quick primer, watch The Godfather: Part II). When Cuban revolutionary Fidel Castro ousted President Fulgencio Batista in 1959, he condemned the poker houses and forced the mob out. 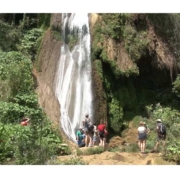