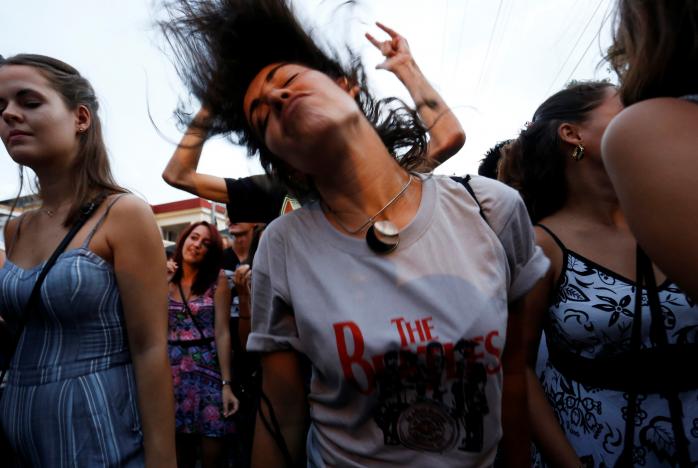 A woman dances during an open-air covers concert in celebration of the release of Beatles’ landmark album “Sgt. Pepper’s Lonely Hearts Club Band” 50 years ago, in Havana, Cuba June 1, 2017. REUTERS/Stringer

HAVANA, June 2th (Reuters)  Cuba, which once frowned upon the Beatles as a decadent Western influence, on Thursday held an open-air covers concert in a Havana park to celebrating 50 years since the release of the band’s landmark album “Sgt. Pepper’s Lonely Hearts Club Band.”

Beatlemania has flourished belatedly on the Caribbean island, where authorities in the 1960s and 1970s considered Beatles songs “ideological diversions.”

That censorship faded after the Cold War ended and late President Fidel Castro in 2000 pulled a cultural about-face, calling John Lennon a “revolutionary” hero and unveiling a bronze statue of him sitting on a bench in a park.

Today, Beatles music is played on the Cuban airwaves and Lennon Park is one of Havana’s minor landmarks.

Hundreds of Beatles fans turned up there on Thursday evening to rock to Cuban covers of emblematic songs from the band’s eighth album, considered by many to be their best, sometimes with a local twist like a salsa beat.

“The Beatles are beloved in Cuba. They are the greatest there is in the history of music,” said Ivan Rico, a dock worker who like many at the concert sported a T-shirt emblazoned with the image of Liverpool’s Fab Four. 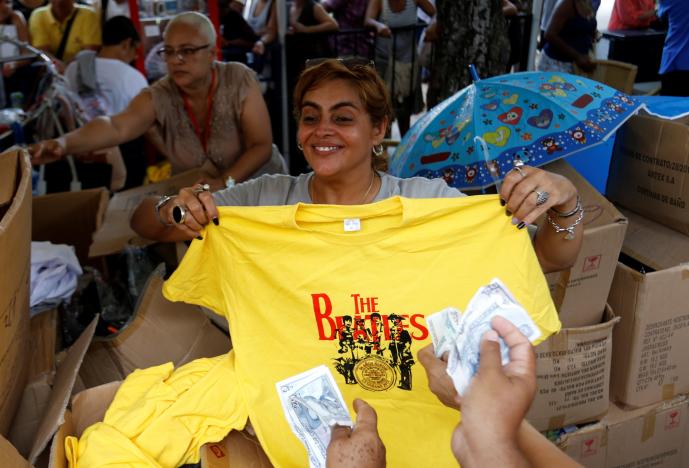 Rico said he felt his school punished him for enjoying the Beatles so he was delighted now to be able to indulge his passion. Other music lovers recalled smuggling in tapes or records and listening to them at clandestine parties.

“I couldn’t live this at the appropriate time of my life, so I’m fulfilling that dream I still have now,” said Ruben Urias Raurell, 62, who traded his fishing equipment for his first Beatles record as a youngster.

Lennon Park has become a pilgrimage destination for local fans as well as foreign tourists. Guards ensure they do not make off with the iconic round-rimmed spectacles placed on the Lennon statue.

She said it hard to find the right type of glasses in Cuba so people traveling abroad would sometimes bring her some back.

“You may say I’m a dreamer, but I’m not the only one” from the song “Imagine” is engraved in Spanish at the feet of the statue. Around the corner from the park is The Yellow Submarine, one of several tributes bars across the island.

The Rolling Stones, another band that was once censored in Cuba, played to a crowd of nearly half a million people in March 2016.

A A will apply for Miami-to-Cuba flights
0 replies

Rolling back Cuba policies would cost US $6.6B