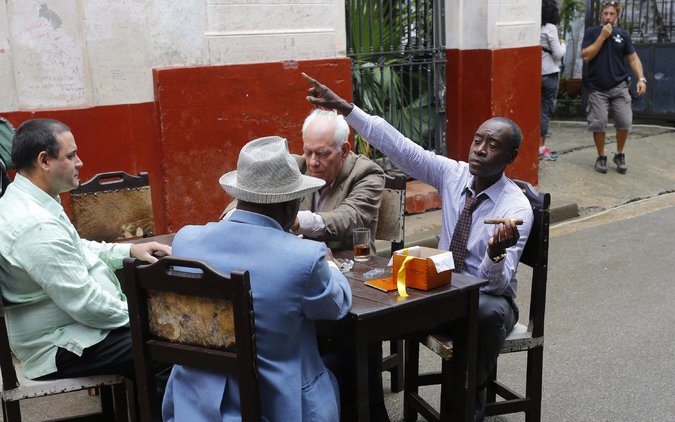 The actor Don Cheadle, right, during a shoot for the series “House of Lies” outside a cafe in Havana. Credit Desmond Boylan/Associated Press

HAVANA, Feb. 13th During a shoot for the Showtime comedy series “House of Lies” last month, Don Cheadle sat outside a cafe in Old Havana, puffing on a fat cigar and clinking glasses with three compadres.

It was a novel scene — an American actor filming an American TV show on a Cuban street — and one that, until last month, would have been illegal under the United States’s economic embargo.

But regulations published by the Treasury Department on Jan. 26 now allow Americans to shoot scripted movies and shows in Cuba for the first time in half a century. The rules opened the door to American projects — which could include scenes for the next “Fast & Furious” movie and an Ethan Hawke film — and to collaboration between Hollywood and the island’s underfunded film sector.

“The world just got bigger because Cuba has become accessible,” said Matthew Carnahan, creator of “House of Lies.”

As a location, Cuba was inspiring, if challenging, he said, but added, “I’m dreaming up reasons to go back.”

A stream of American filmmakers needing to hire Cuban equipment and crews would be a boon to the country’s independent production industry, which sprouted in the late 1990s as digital technology made filmmaking more accessible and state money for movies ran dry.

Some Cuban filmmakers worry, though, that their government will open its arms to Hollywood while continuing to give its own filmmakers the cold shoulder. Independent production companies in Cuba operate in a legal limbo, getting little or no funding from the state and often struggling to get their movies past the censors.

“It’s great that people from Hollywood want to come to Cuba, but it’s caught us at a bad moment,” said Carlos Lechuga, a Cuban director. “We have stories to tell, and right now we don’t feel that we can do that.”

And Cuban filmmakers have been fielding inquiries. “There isn’t a day that I am not meeting with a potential client from the United States,” said Oscar Ernesto Ortega, 29, whose El Central Producciones produces music videos, commercials and documentaries for clients like the Puerto Rican band Calle 13 and Red Bull Media House from offices in Miami and Havana.

Boris Crespo, founder of BIC Producciones, in Havana, said he had been working flat out for the past year, providing production services for Conan O’Brien’s four-day visit to Cuba last year and the History channel’s “Top Gear,” which filmed an episode in Cuba in January.

Mr. Carnahan, who worked with Island Film, another Havana production company, said he was struck by the “passionate” crew and the quality of Cuban actors. (The “House of Lies” shoot was planned before the new regulations went into effect, so producers had to get a license from the Treasury Department.)

What Cuba is missing, he said, are decent cellphone connections, fast Internet access and even “basic things — hammers — things that we don’t give much thought to.”

And the process of procuring shooting permits was extremely slow, he said.

Mr. Crespo said that the state-funded Cuban Institute of Cinematic Art and Industry “drowns in its own bureaucracy.”

Some Cuban filmmakers worry that American producers will steer clear of controversial themes in order to get permission to film from Cuban cultural authorities, who require all filmmakers to submit a synopsis or script of their project. Mr. Carnahan said that the “House of Lies” script was reviewed by the Cuban culture ministry, but that the authorities requested no changes and had “a sense of humor about the material,” which ribbed Cuban bureaucracy.

But Cuban filmmakers said the authorities were intolerant of works that touched on issues like the early treatment of H.I.V.-positive Cubans or the culture of citizens spying on one another, topics that have been covered in their films.

Mr. Lechuga said that his first feature, “Melaza,” about a destitute former sugar-producing town, which was shown at the Havana film festival in 2012 and won an independent critics’ prize, was not released in Cuban theaters for nearly a year, and then only in one cinema.

“The government doesn’t mind if you shoot ‘Fast & Furious’ here, but it doesn’t want the local industry to make movies about our reality,” he said.

Lázaro González González, whose documentary about cross-dressing performers, “Máscaras” (2014), has had a very limited release in Cuba, said he hoped the new rules would make it easier to distribute work in the United States.

Claudia Calviño, executive producer at Producciones de la 5ta Avenida  said she was disappointed that Americans, so far, did not seem interested in co-productions. Her company has been involved in a handful of such films with European producers, like “Hotel Nueva Isla” (2014), a feature-length portrait of life in an abandoned hotel that she produced with El Viaje Films of Spain. She said no American filmmaker had asked what 5ta Avenida was working on or talked about developing joint projects.

Still, the détente has spurred exchanges. During Havana’s film festival in December, a delegation of actors, directors and writers organized by the Sundance Institute’s feature film program offered workshops on screenwriting, production, documentary editing and scoring for film.

Ethan Hawke, who was part of the group, told reporters at the time that he wanted to film an adaptation of Tennessee Williams’s “Camino Real.” He confirmed his plans in a statement to The New York Times, and said he been scouting Havana.

Michelle Satter, director of the Sundance feature film program, said the détente was a chance to exchange ideas with, and help train, the next generation of Cuban filmmakers.

“We’re listening,” she said by telephone from Los Angeles. “We want to hear these stories.”

Mr. Carnahan said that he was pondering a Cuban project — to improve access to equipment, say, or to help them tighten up scripts.

And there were plenty of stories in Cuba, he said.

“It’s so interesting there right now,” he said, “I wish I could just sit there with a bag of popcorn and watch.”