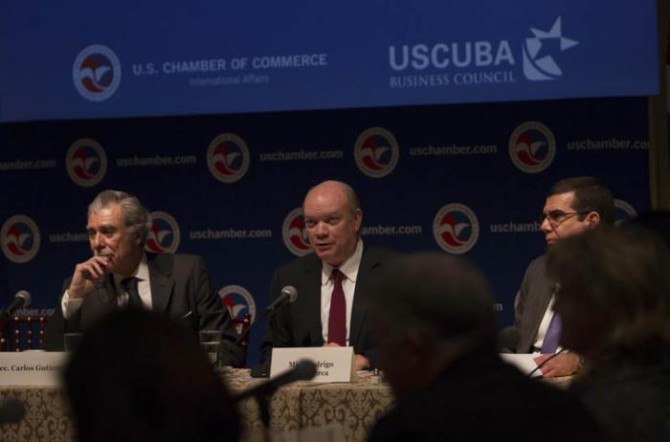 Cuban Minister of Foreign Trade and Investment, Rodrigo Malmierca (C) visiting the US Chamber of Commerce in Washington, DC

HAVANA,21 Feb. (ACN) Cuba’s Foreign Trade and Investment Minister Rodrigo Malmierca said on Tuesday in Washington that US companies will not be discriminated against in Cuba once the US restrictions imposed on their firms are lifted.

According to Prensa Latina news agency in Washington, US companies will be welcomed on the island and that Cuba’s relations with them will be the same as any other country, said Malmierca during a press conference at the US Chamber of Commerce where the Cuban government official was heading a delegation on a working visit.

“We need foreign investment, an important component for our development that is why we cannot place barriers or complicate the process,” he said.

Malmierca reiterated that the main obstacle facing US companies is Washington’s economic embargo against the island since the early 1960s.

According to Malmierca, once the embargo is lifted or Washington approves a licence for US companies to do business with Cuba, they can begin talks with local entities on the possibility of exchanges.

The minister added that there are US companies that have advanced in their negotiations with Cuba but the embargo is an obstacle for them to do business with the Caribbean island.

“There are those that are almost at the point of signing contracts,” he said.

Meanwhile, the vice president of the Americas at the US Chamber of Commerce, Jodi Bond, said that the US companies are at a disadvantage to other countries as a result of the economic embargo.

“The world competitors are approaching the Cuban market without a problem, but we know that we will also have the same possibilities,” she stressed.

Bond believes that the US government is doing all it can with such a complex scenario of regulations turned into law in 1996, which now requires Congressional action for its repeal.

Malmierca and Bond highlighted the signing on Tuesday in Havana of a memorandum of understanding to normalize direct flights between both countries.

In this regard, they celebrated the advantages for trade and flights represented by an agreement by US Transportation Secretary Anthony Fox and his Cuban counterpart Adel Yzquierdo that will allow 20 daily flights from the US to Havana and ten each to other nine Cuban international airports.

“Today is a historic day but we have had several like these in the last 14 months,” said Bond regarding the simultaneous presence of two high level government officials – Fox in Cuba and Malmierca in Washington DC – which constituted an important event in many years.