HAVANA, Ja. 24th (HT)  In 2019, Cuba declared tourism one of the six strategic sectors of the National Economic and Social Development Plan for 2030. In the words of Minister of Economy Alejandro Gil, during his presentation of this plan to the National Assembly of Popular Power, for gains in social and economic development, tourism “represents a potential generator of financial currency, which has a spillover and drag effect on other economic activities.”

In the past President Miguel Díaz Canel has also referred to the importance of the Tourist Industry for the nation’s economy. However, end of 2019 figures published by the Office of National Statistics (ONEI) are well below what was planned for the first phase (2019-2021) of the proposed plan.

Although the official forecasts called for almost 5 million visitors to the Island, the data shows that the numbers did not reach 3.5 million. Since June 2019, the ban on cruise ships, yachts and private planes from the United States, as part of the tightening of the economic sanctions against Cuba, were finalized. The blockade reduced the already limited arrival of North Americans, consolidated since 2015 as the second largest market for visitors to Cuba, by only 5.2 percent, according to ONEI figures.

Given the contraction of a sector that contributes 10 percent of the Cuban Gross Domestic Product, the country’s strategy, according to the director general of Development, Business and Investment of the Ministry of Tourism (MINTUR), José R. Daniel Alonso, is to guide the investments of Cuban state-owned businesses, and international businesses, to expand the country’s accommodation capacity.

On this, there are mixed opinions from economists. Cuban economist Pedro Monreal explains it in simple terms: “The plan is to invest, in 2019, more than 3 billion pesos (120 million USD) — 6 times what is invested in agricultural activity — in a sector such as tourism, which has an idle capacity close to 50 percent and whose estimated visitors have just been reduced by 10 percent.”

On the other hand, economist Alejandro Figueras, an advisor to the ministry in question, explains that dismantling the organization and coordination of current construction projects would delay the process when resuming it in the future. Re-starting the dynamics of expansion that has been achieved so far, and with results similar to those of 1998 — when tourism grew tremendously — would not be achieved in an instant.

“It’s been 20 years since 3,000 hotel room were built in a year, until last year. We might consider reducing the number of rooms built, but that’s not the government’s plan, which is to continue adding to room availability, and that has a cost for hotels with low occupancy,” added Figueras.

According to figures from an unpublished study conducted by Professor Figueras, in 1991 there were 12,000 hotel rooms for tourism in Cuba, and there were approximately 340,000 visitors. In 2019, the country had 72,657 rooms (an increase of 60,000) and received a total of more than 3 million tourists (an increase of almost 90 percent). However, in more than 30 years of tourism development as an economic sector, the income for each tourist that arrives in Cuba is now lower: $600 as compared to $700 in 1991.

Taken in context, in a weakened economy the question of prioritizing these investments when there are so many other needs in the country is up in the air. About half the rooms are empty and the income produced by the tourism sector itself has decreased at the same rate as the arrival of tourists. 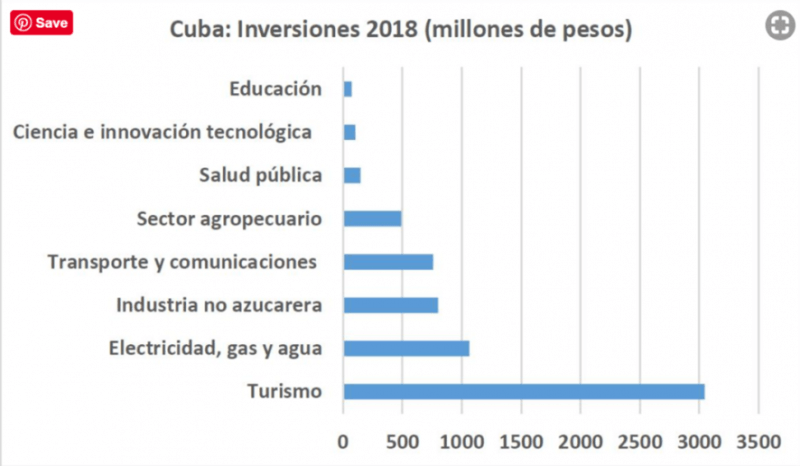 But even if reality surpasses predictions, by 2025 — the last year of the Ministry of Tourism’s (MINTUR) plan — there will be different realities then in both Cuba and the United States that are different. In Cuba, for example, and according to the Constitution, there will be a new administration. In the United States, even if Trump wins reelection in 2020, there will be a new president. And even with a new US administration dominated by the Republican Party, tensions may not be as defined as they are today. We will then be exposed to a new and unexplored scenario — possibly with a different combination of options.

Cuba, whose duty is to work for today and tomorrow at the same time, could be betting on an increase in future tourism, which impacts the national economy as unexpectedly as the boom of 2015 and 2016, after the declaration of normalization of relations between Cuba and the United States.

Tourism was the salvation of the 1990s. More than three decades later, external circumstances continue to be aggressive against Cuba, the country seems headed into a new, or perhaps a second, economic crisis, and the results continue being not those projected as the salvation. The expected miracle, then, needs other drivers to make it happen.
(Progreso Weekly)

The best nightlife in Havana, from converted old factories to basement salsa...