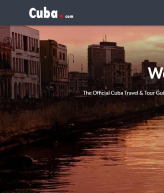 The domain is selling for $4.5 million in cash, but the purchase can be financed for five years with an initial payment of $2 million.

“This special digital asset has enormous growth and revenue potential in the areas of travel, tourism, hotels, entertainment, recreation, etc.,” said Mark Thomas, executive director of the firm specializing in the buying and selling of premium domain names.

Although Thomas did not specify who the seller is, he said the site has belonged to the same owner for more than 15 years. Various reports name Skip Hoagland, founder of Domain New Media LLC, as the owner.

John Kavulich, president of the U.S.-Cuba Trade and Economic Council, said the sale was significant because the offer “represents the first specific U.S. dollar valuation for a United States-based business that is solely focused upon Cuba and is for sale.”

Almost two years after the restoration of relations between Cuba and the United States, business opportunities with Cuba are attractive to U.S. companies. New regulations approved by the Obama administration that seek to “empower the Cuban people and build bridges between the two countries” have spurred much interest.

The most recent regulations authorize, among other things, the scientific collaboration between the two nations in the field of medicine and the U.S. sale of medicines produced in Cuba.

However, reservations still exist among many companies primarily because of the continued complicated legal landscape as a result of the economic embargo, which remains in place, as well as Cuban government restrictions and the upcoming U.S. presidential election that could turn the table on U.S.-Cuba policy.

Several U.S. companies and experts met earlier this month in Miami for a “Preparing for Trade with Cuba” conference to discuss future business opportunities.

TripAdvisor to Start Booking Travel to Cuba
Scroll to top