HAVANA, Jan. 24th  Viengsay Valdés, first dancer of the National Ballet of Cuba (BNC), will be the new artistic assistant director of the company, appointment that puts in her hands responsibilities that until now corresponded only to the legendary Alicia Alonso, of 98 years, and sole director of the quoted dance body.

After her absence for the first time in the history of the Havana Ballet Festival, held from October 28 to November 6, Alicia Alonso reappeared in early January on the stage of the Gran Teatro de La Habana that bears her name. According to reports from the official Prensa Latina news agency at the time, “health problems kept the prima ballerina assoluta cubana away from the public scene for months.”

The appointment of Viengsay Valdés draws a presumable line of relief at the BNC, and in Cuba has raised favorable expectations among dancers and loyal audiences to an emblematic company of this art in America, although for years suffering from financial problems, exodus of dancers and urged for a renewal in their repertoire, led by the classic Giselle.

The renowned artist declared to be “grateful for the trust they have placed in me” and announced her goal of “helping the dancers a lot in their training and professional development, I hope to transmit safety and inspiration to share that common dream of a united company and strong”.

According to the official designation of the Ministry of Culture, announced by the vice minister and president of the National Council of Performing Arts, Fernando Rojas, Alicia Alonso continues to be the owner of the institution, but Valdés will take artistic decisions thanks to the position created expressly for she.

“With Alicia I have the best relationships, marked, above all, by respect and admiration. He always gave me great professional advice in my career and was an idol to follow, “said the dancer.

On his management, Valdés said that “at this moment, I value keeping and defending the historical legacy of our company so that it continues to be recognized internationally,” while declaring its willingness to strengthen relations with the National Ballet School Fernando Alonso , directed by her teacher Ramona de Sáa, “in favor of the same line of work and the identity of the Cuban dancer”

Viengsay Valdés (Havana, 1976) is a member of the International Dance Council assigned to Unesco, and is considered the first female figure of the current Cuban ballet, being invited to important companies from the United States, Puerto Rico, South Africa and Russia, among others. . It was chosen by the magazine Dance Europe as one of the best dancers in the world in the 2010-2011 season.

The National Ballet of Cuba is 70 years old since it was founded by Alicia, Fernando and Alberto Alonso. He has produced choreographic versions of classic works, created by Alicia Alonso and which have been danced by the ballets of the Paris Opera, the Vienna Opera, the San Carlo in Naples, the Prague Opera and the Teatro alla Scala in Milan, among others.

During the appointment of Viengsay Valdés as artistic deputy director, Deputy Minister Fernando Rojas announced that a national government commission will be created, responsible for planning tributes for Alicia Alonso’s centenary in 2020.
Taken from elnuevodia Photo: Oncuba 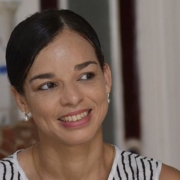 Award granted to Viengsay Valdes and two other dance personalities

Cuban minister warns the White House on allowing courts to fight over the country’s...

Animal Defenders Organize against Zoosadism in Cuba
Scroll to top