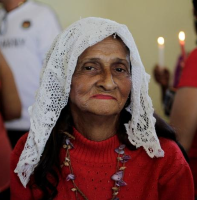 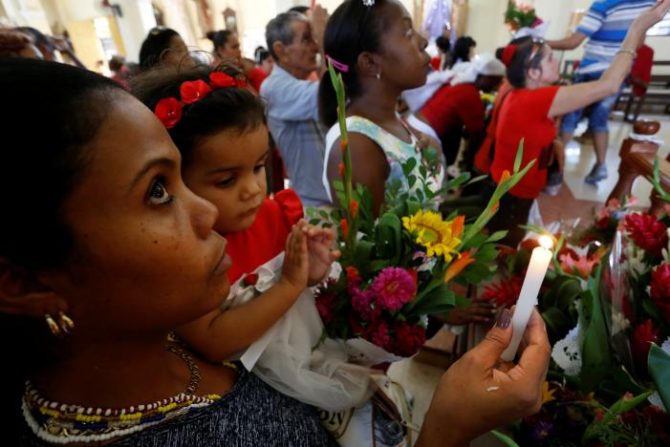 People gather at the Saint Barbara Church to pray on the day known as Santa Barbara to Catholics and Chango to followers of Cuba’s Santeria religion, in Havana, Cuba, December 4, 2016. REUTERS/Stringer

Castro died aged 90 on Nov. 25 and his ashes were interred in the southeastern city of Santiago de Cuba on Sunday after nine days of national mourning.

A crowd in the low hundreds flocked to a church associated with the saint on the outskirts of Havana in the early hours of Sunday, perhaps the largest gathering in the capital all week except at official events to mark Castro’s death.

But local residents, many wearing the red color of the saint known as Changó in Santeria, said the Dec. 4 festival was a shadow of its normal self, missing the drumming, flowers and out-of-town crowds than make it an annual highlight. 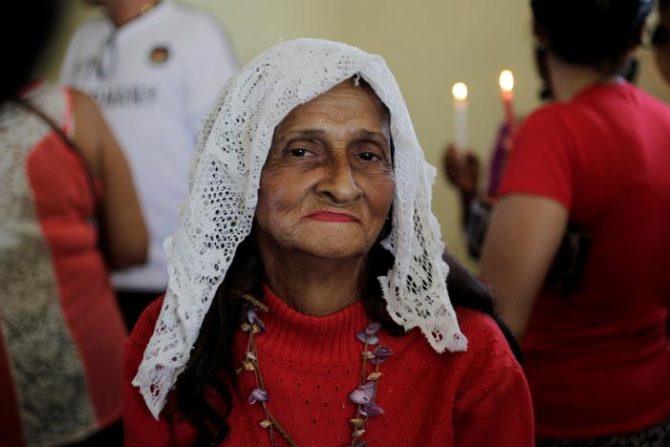 A woman attends a mass at the Saint Barbara Church where people gathered to pray on the day known as Santa Barbara to Catholics and Chango to followers of Cuba’s Santeria religion, in Havana, Cuba, December 4, 2016. REUTERS/Stringer

“Other years there is food and refreshments for people who aren’t from here,” said Armando Rodrigo, 26, mingling with his friends outside the church in the Parraga neighborhood as policemen looked on.

Inside the church, a priest led songs as devotees lit red candles. Santa Barbara is a female saint in the Roman Catholic pantheon, but represents a male ancestor called Changó with roots in West Africa in Santeria. Changó is associated with fire, lightning and war, as well as drumming and music.

Although Castro was not religious, some people have looked for Santeria symbols in his life, such as when a white dove landed on his shoulder during a speech a week after the victory of his 1959 revolution.

The dove is the symbol of the Santeria deity of love, Oshun. 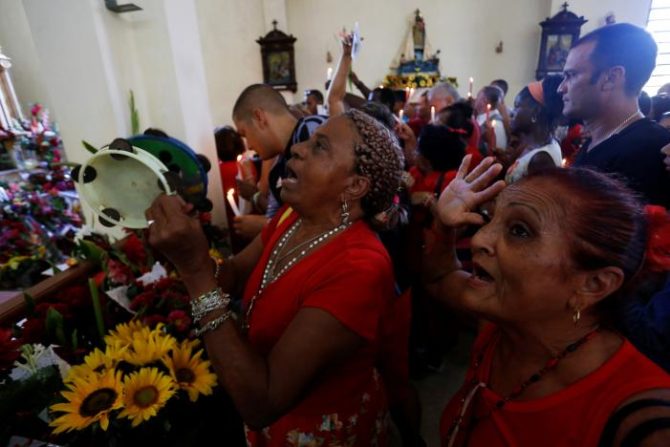 People gather at the Saint Barbara Church to pray on the day known as Santa Barbara to Catholics and Chango to followers of Cuba’s Santeria religion, in Havana, Cuba, December 4, 2016. REUTERS/Stringer

Some devotees in Parraga on Sunday morning thought it was notable that the day of Castro’s burial coincided with Santa Barbara’s celebration, and that he had been mourned for the same nine day period some practitioners of the religion consider auspicious.

Castro initially described his revolution as atheist but later softened his stance to the Church and reinstated Christmas as a public holiday.

The restrictions on the event, including the closure of the church at midnight, and the lack of fervor in homes normally decked out for the celebration annoyed some attendees.

“I’ve lived 39 years and never seen it like this,” said one devotee,” who said he respected Castro’s passing, but didn’t think it should impinge on his religious beliefs.

Google Fiber in Cuba? Here’s How It Might Look
Scroll to top