HAVANA, Feb.4th The species of snails Polymita picta, of Cuban origin, reached second place in the survey “Mollusc of the year 2021”, with 6,377 votes.

Said snail, considered the most beautiful in the world, participated in the competition along with 120 other nominees, as reported by the LOEWE Center for Translational Genomics of Biodiversity (LOEWE-Center TBG) and Unitas Malacologica (international society of malacologists), organizers of the contest.
The public voting took place for two weeks through the website https://tbg.senckenberg.de/mollusc/, and almost 22,000 votes were cast from more than 126 countries, with the Grand Argonaut (Argonauta argo) winning, with the 36%.

Presenting the results, Dr. Carola Greve, Laboratory Director of the LOEWE-Center TBG, noted that thanks to this project, “we were able to draw the media’s attention to molluscs and hopefully bring people a little closer to their diversity and beauty, and raise awareness of their increasing threat status.
‘ According to the scientific literature, Polymita picta belongs to the class of gastropods, they are lungs, hermaphrodites, with two oral and two ocular tentacles.
On the other hand, on the pageant site, the Cuban mollusc is described as a unique snail, recognized for its vibrant shell colours and its enigmatic love dart, a device for stabbing mating partners. 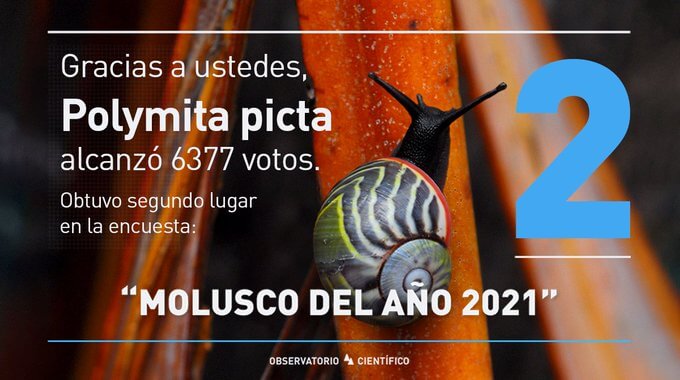 Possibly, they possess the most beautifully coloured snail shell in the world, two to three centimetres wide, in yellow, brown, red, green, white, black or orange, and with elegant spiral bands, the website detailed.

These attractions expose the Cuban Polymita to indiscriminate collections for sale, and with it, to the danger of extinction. Added to this is the loss or transformation of the natural habitat, the introduction of exotic plants and animals that compete for their environment and, in recent times, climate change.
To confront illegal traffic, the General Customs of the Republic is governed by Resolution 160 of the Ministry of Science, Technology and Environment, which establishes regulations for the protection of a wide list of species of significance for biodiversity.
Meanwhile, the Convention on International Trade in Endangered Species of Wild Fauna and Flora agreed to include the genus Polymita, for its protection against excessive exploitation through international trade.
(Translation Granma)