Catholic Cardinal Jaime Ortega on Sunday is a testament to his success in elevating the Church’s position on the Caribbean island after the fall of the Soviet Union.

People and members of the clergy and government attend a final Mass for Roman Catholic Cardinal Jaime Ortega at the Cathedral of Havana, in Havana, Cuba July 28, 2019. REUTERS/Fernando Medina/Pool

Cuban First Vice President Salvador Mesa and two other top leaders on the Communist Party Politburo attended the Requiem Mass along with other officials.

Ortega, who died on Friday aged 82, was buried afterward in the city’s Colon cemetery.

A labor camp inmate in the 1960s when Fidel Castro’s revolutionary government was rounding up religious figures and other perceived enemies, Ortega became archbishop of Havana in 1981 at a time when Cuba was still officially atheist.

For the more than three decades that followed, as Castro’s stance on the Church softened, Ortega raised its visibility and power, building a working relationship with the government thanks to his nonconfrontational style and opposition to U.S. sanctions.

Ortega earned the wrath of hard-line exiles and some dissidents on the Caribbean island with his stance.

“His work helped a lot to bring closer the ideas of the Cuban government and the Catholic church,” retiree Maria Green, said, standing outside the Cathedral.

“He managed to solve many things and opened the way for many, many Cubans,” she added.

Ortega hosted three popes and negotiated the release of dozens of political prisoners in 2010 and 2011.

When Raul Castro became president in 2010, Ortega backed his attempts to open up the country and restore relations with Western nations.

At a critical moment in secret talks between Cuba and the United States that led to a detente in December 2014, it was Ortega who relayed messages among Pope Francis, Castro and then-President Barack Obama.

Ortega met with hundreds of U.S. lawmakers, religious figures and businessmen over the years.

John Kavulich, president of the U.S.-Cuba Trade and Economic Council, worked with Ortega in the 1990s to channel medical aid to the country and said members of his organization provided some logistics for Pope John Paul II’s historic visit in 1998. 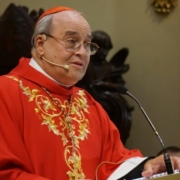 Cuba expands internet access, but under a very wary eye
Scroll to top