HAVANA, July 6th (AFP) After making a fortune with his early antivirus software, then caught up in murder and drug cases in Belize, US millionaire John McAfee has added a new chapter to his tumultuous life story.

From a yacht in Havana harbor, he says he is running for the US presidency. This will not, he deadpans, be “an ordinary campaign”.

“I am wanted as a criminal by the government for which I am running for president,” McAfee says as he sits on his white yacht surrounded by an entourage of seven campaign aides and two enormous dogs.

He wears shorts, a tropical shirt, wraparound sunglasses, and sports a greying goatee.

McAfee’s immediate goal is to win the presidential nomination of the Libertarian Party, which supports free trade and a sharply reduced federal government.

He tried but failed in 2016, beaten for the party’s nomination by Gary Johnson, who went on to win just over three percent of the vote in the election.

But McAfee has an unusual admission for a presidential candidate: “I don’t want to be president, I really do not, nor could I be,” he says, puffing on a cigar.

“Really, look at me,” says McAfee, whose deep tan and relaxed attitude hardly give him the look of a candidate. “I cannot be president. However, I do have a large following and I will influence this next election.”

Since making a fortune with his antivirus software in the 1980s, the 73-year-old has become a self-styled cryptocurrency guru, claiming to make US$2,000 a day. He has nearly 1 million followers on Twitter. 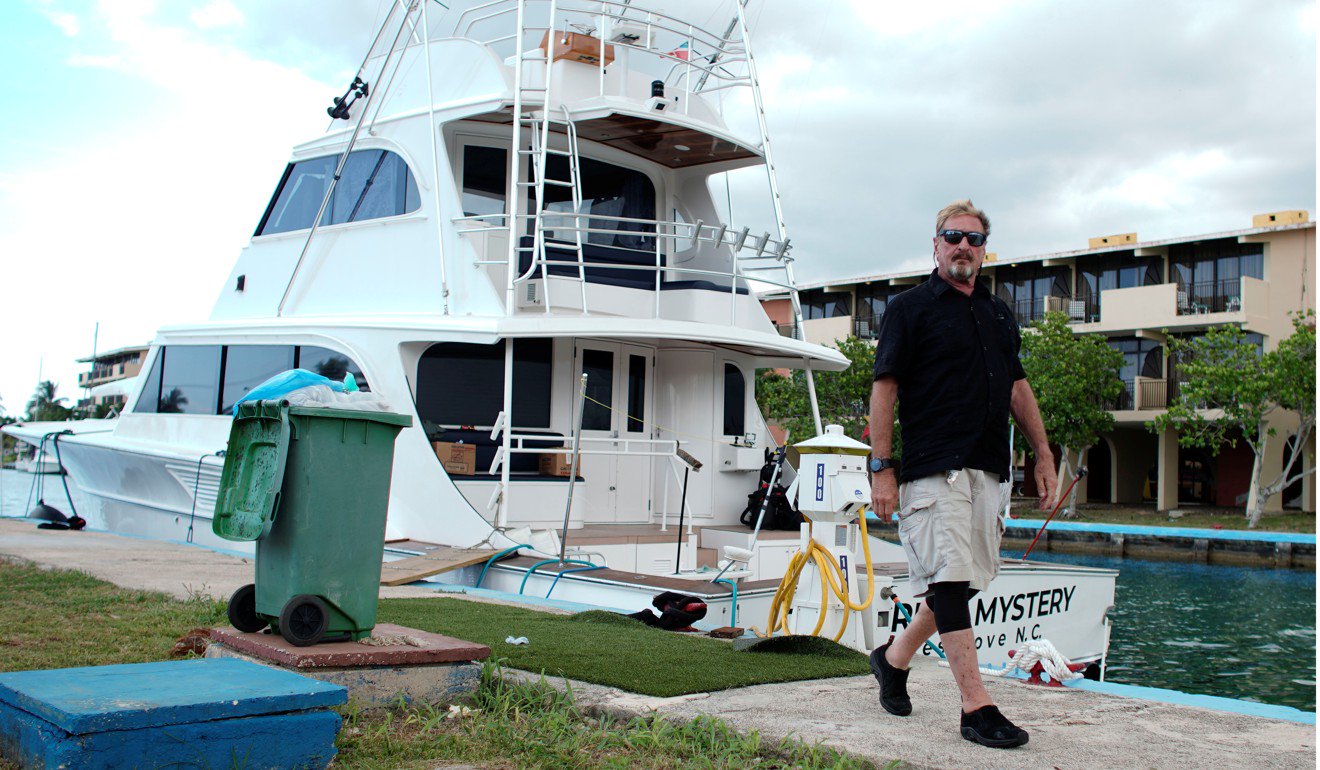 John McAfee and his yacht at the Marina Hemingway on Thursday. Photo: Reuters

His yacht, docked at the Marina Hemingway in Havana, is called “The Great Mystery” – appropriately for this enigmatic man.

McAfee began his career as a Nasa engineer before working for several software companies, where he learned of the existence of a computer virus – and began figuring out how to destroy it.

Thus McAfee Associates was born in 1987, quickly becoming a giant in the antivirus industry. He sold the company to Intel in 2010 and is now worth an estimated US$100 million.

But his success story – worthy of a Steve Jobs or a Bill Gates – took an unexpected turn: moving to Belize in Central America and living a sometimes chaotic life, he suddenly became tabloid grist when his neighbor was mysteriously murdered in 2012, a crime that has not been solved.

When police found him living with a 17-year-old girl and discovered a large arsenal of weapons in his home, McAfee disappeared on a month-long flight that drew breathless media coverage.

The dead neighbor’s family later filed a wrongful death suit against McAfee; last year a court in Florida found against him, ordering him to pay the family more than US$25 million.

Ever the provocateur, in 2013 the millionaire posted a rambling video in which he explained how to uninstall McAfee software, his nose covered in white powder as seven scantily clad women massage his shirtless chest and shoulders.

The film, which ends on an image of him firing a pistol at a computer screen, was watched more than 9 million times.

In 2015, McAfee was arrested in the United States for driving under the influence. He again disappeared from view until January 2019, when he fled the country.

“I went first to the Bahamas because I was charged with income tax evasion,” he said, adding that when the FBI went there looking for him he fled to Cuba. “I have not paid taxes for eight years. I will not pay taxes again – it is unconstitutional and illegal.”

This capitalist king’s choice to find refuge in a Communist country might seem surprising.

Yet McAfee insists he is probably Cuba’s “best friend”.

McAfee has offered to help Cuba launch a cryptocurrency of its own. The government said earlier it was studying how the virtual money might be used to get around US economic sanctions. McAfee said that would be “trivial”.

Who owns the name, McAfee? I do, according to John McAfee

It is not always easy to determine the veracity of everything McAfee says. US tax authorities, asked about his possible legal jeopardy, would not confirm whether he faces any charges.

No extradition request has been filed with Cuban authorities.

The mere fact of having sailed his yacht to Cuba, however, violates new US regulations that ban American citizens from traveling to the island on cruise ships or private boats.

Still, amid continuing tense relations between Havana and Washington, the millionaire says he plans to stay there until the US elections in November 2020.

“Cuba has never extradited an American citizen,” he notes, “and Cuba is not exactly a friend of the US government.”

Yet the two countries do cooperate on police and legal matters. Last November, the Cuban authorities turned over to their US counterparts an American wanted by Interpol for murdering his girlfriend.