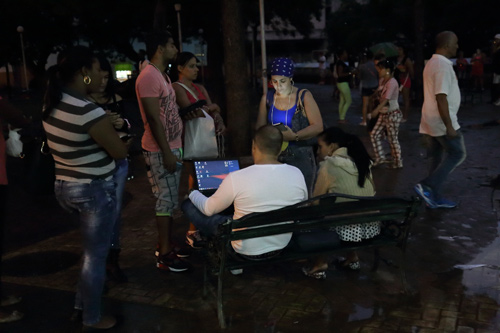 HAVANA,March 12  I arrived at the Wi-Fi hotspot at the Marianao amphitheater at around five in the afternoon. Immediately, a sixtyish woman approached me to offer me connection time for 1 CUC.

Interested in paying a bit less to connect for only one hour, I let her lead me to where her son was. With a laptop, the latter was letting five different people use his account. No sooner was I standing next to the young man than an individual arrived and reproached the elderly woman for hogging everyone in the area. They argued, half-jokingly. Apparently, they knew each other from doing business in the park. They made it clear that everyone has their own way of doing this and that the most skillful walk away with the biggest profits.

It was quite the deal for them, though not exactly that for users, because, with several people connected at once, Internet navigation became slow at times and the connection was lost at others, upsetting more than one of the people there.

There are currently many people involved in this rather easy business, and, while money changes hands, people don’t get much out of it, as an hour is barely enough to check one’s email. I couldn’t even reply to a message, much less upload or download a photo. The connection speed made all this complicated and the hour slipped through my fingers.

Many say that these Wi-Fi hotspots are a kind of experiment. I wonder how long this abomination created by the government will last, because, the truth of the matter is that this experiment is producing a lot of revenue for ETECSA , which maintains small spaces for service to the population, the poor of the earth that have to be satisfied with the crumbs from promises too old to have credibility.