HAVANA, May 12th, (CNN ) One of Cuba’s most rebellious dissidents has spent more than ten days in a closely guarded hospital in Havana but it’s not clear what, if anything, he is being treated for.

Artist and activist Luis Manuel Otero Alcántara was on day eight of a hunger strike protesting what he said was a campaign of Cuban government harassment against him when, before dawn, health officials transported him to a government hospital.
His fellow dissidents say Otero Alcántara was taken for treatment against his will and that they have not heard from him, other than through videos released by Cuba’s state-run media.
Cuban health officials said when he was admitted, Otero Alcántara did not seem to have been deprived of food or water and on Tuesday said he is eating and drinking, raising the question of why he remains hospitalized and incommunicado.
In one of the videos that was released, Otero Alcántara appears in good health, joking with a hospital administrator while affirming “I am going to keep demanding my rights as an artist.”
Cuban health officials say Otero Alcántara is still undergoing testing and is being treated voluntarily.
While the Cuban government grapples with the economic impacts of the coronavirus and tougher US sanctions, Otero Alcántara and his small group of tech-savvy “artivists” are increasingly a source of frustration for officials on the communist-run island.
In tweets and videos uploaded to social media, Otero Alcántara and other members of his San Isidro Movement have documented their campaign in real-time against official censorship and the Cuban police and security officials that often shadow their every move.
“We are connected,” is a frequent refrain and hashtag in his messages, a reference to the recent arrival of mobile internet to the country, which has allowed many Cubans to circumvent state-run media and communicate directly with rest of the world and their fellow Cubans.
Some Cuban officials claim that the self-taught Otero Alcántara isn’t really an artist, which speaks to his assertion that government bureaucrats shouldn’t decide what qualifies as art on the island.
At times Otero Alcántara has threatened to drive a wedge between the government and Cuban artists, who in recent years have enjoyed a special status that allowed them to criticize the government, albeit indirectly, and legally earn hard currency by selling their work to tourists and consumers abroad.
supporters during a hunger strike, alleging they had violated health restrictions put in place to stop the spread of the pandemic.
Within hours, several hundred Cuban artists and students staged a rare sit-in protest outside the Cuban Ministry of Culture and some of the island’s best known cultural figures voiced their support for Otero Alcántara and greater freedom of expression.
Cuban officials quickly released Otero Alcántara and claimed he was part of a US “soft coup” against the island.
“The show is very similar to those staged on other occasions by other mercenary groups and puppets in the service of the U.S. government,” an article stated in the Cuban communist party newspaper Granma about Otero Alcántara days after the protest. “The new show, orchestrated from Washington and Miami, is part of plans for subversion against Cuba.” 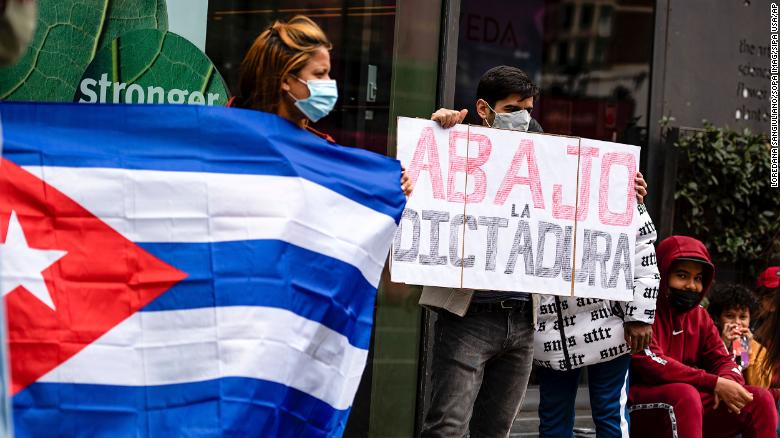 But Otero Alcántara, an Afro-Cuban millennial who lives in a downtrodden area of Old Havana that tourists rarely venture into, does not fit the traditional image of an anti-Castro militants fighting to return the island to the days before the revolution.
And he is particularly adept at leveraging the obstacles Cuban officials throw at him as a form of performance art that generates more attention for his movement.
While his activism, so far, does not appear to be an existential threat to the Cuban government, it has nonetheless proved unnerving to officials.
Otero Alcántara appeared in a music video for the song “Patria y Vida” or “Fatherland and Life,” a play on the revolutionary slogan “Fatherland or Death,” which is how Fidel Castro ended his speeches. The video for the song, which has become an anthem for anti-government resistance, has received five million views on YouTube.
In April, when police surrounded his home, he put on an exhibition where he sat restrained with a garotte around his neck.
After he accused State Security agents of seizing his art, Otero Alcántara demanded $500,000 in compensation and said he was, again, going on a hunger strike.
“I will fight to the last breath for my artistic freedom,” he wrote in a widely seen message. “If my body dies, I hope it will be a spark for the freedom of Cuba.”
When Otero Alcántara was taken to the hospital in May, doctors released a statement saying the activist “showed no signs of malnutrition,” trying to cast doubt on his hunger strike, but said he would remain “under observation.”
Cuban state-run media have published regular updates on Otero Alcántara, a rare acknowledgement of anti-government dissent. But save one video where he briefly speaks, he has not been heard from and his supporters say they have been blocked by police from seeing him in person.
As Cuban officials try to adapt to Otero Alcántara’s new brand of activism, the government runs the risk of endangering potentially improved relations with the Biden administration, which so far is moving slowly on engaging with the island.
“Like all Cubans, Luis Manuel Otero Alcántara deserves to be treated with dignity and respect,” the US Embassy in Havana posted on Twitter. “We have seen reports that he is in hospital and that his state is stable. We urge the authorities to protect his well-being in this difficult moment.”
Some Cuban artists argue that if greater freedom of expression were allowed, the tension with the state and artists would ease.
“These little scandals will end the day they legalize protests,” famed singer Silvio Rodriguez, a long-time supporter of the Cuban revolution, wrote on his blog. “Authorized protests. Democratic socialism. And the police protecting those who exercise their rights,” he continued
But top Cuban officials warn that a harsher crackdown could be on the horizon.
“To the mercenary lumpen who make money off of everyone’s destiny, to those who ask for an invasion, to those who continuously offend with words and deeds,” Cuban President Miguel Diaz-Canel said in a televised speech in April while accepting the powerful post of head of the Cuban communist party, “know that the patience of the people has limits.”
12/05/2021/by Havana Live
https://havana-live.com/wp-content/uploads/2021/05/HL4YF4C35FDGTJQLHEZV4OVMDI-1140x815-1-1024x732-1.jpg 772 1080 Havana Live https://havana-live.com/wp-content/uploads/2018/09/logo_havana.png Havana Live2021-05-12 15:01:582021-10-04 18:19:10Why is one of Cuba’s most rebellious artists still isolated in a government hospital?

Sunwing Relaunching More Flights to Cancun and CubaWhy doesn’t Biden want anything to do with Cuba … for now?
Scroll to top