Havana, March 16th  (PL) We will do our best show and give Cubans a warm greeting, said Deborah Harry, vocalist of the band Blondie, which  has offert this Friday a concert at the Mella Theater in Havana.

The recital will be the first of two the group has scheduled in Cuba this weekend, where he will share the stage with local singer-songwriter David Torrens and Afro-Cuban rock group Sintesis.

In declarations to Granma newspaper the renowned singer said that there is the possibility of merging and recording something with the artists, ‘I love having Cuban musicians on the show, although we do not have much time to be together’, she said.

She also said it would be wonderful to have guest percussionists, ‘maybe we can do something really interesting and fun, that’s one of the things we’re looking for, close experiences with Cuban artists, I think it would be beneficial for everyone.

The singer also stated to be attracted by the Cuban music, because as she said she has listened to it all her life, she also commented she has great expectations with this visit, she seeks to know how Cuba is because she has always heard stories about how wonderful people are.

During the recitals, the group will perform a varied repertoire includeing classics from their discography and songs from their most recent studio album titled Pollinator.

Blondie, created in 1974, is one of the pillars of the emergence of new wave and punk rock in the United States and has been a member of the Rock and Roll Hall of Fame since 2006. 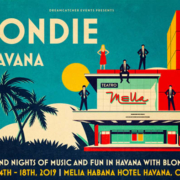 US slashes visa duration for Cubans in ‘reciprocal’ move