HAVANA, April 8th UK ambassador to Cuba Dr Antony Stokes has formally thanked the Cuban government for taking in British cruise ship MS Braemar. The vessel, with a number of people infected with coronavirus (Covid-19) onboard, was refused permission to dock in the Bahamas and Barbados.

But the Cuban government offered to take it in and, as a result, 43 Cuban workers who helped had to go into quarantine for two weeks. Most of the ship’s 600 passengers were from the UK and have now been allowed to return home.

A ‘great gesture of solidarity’ 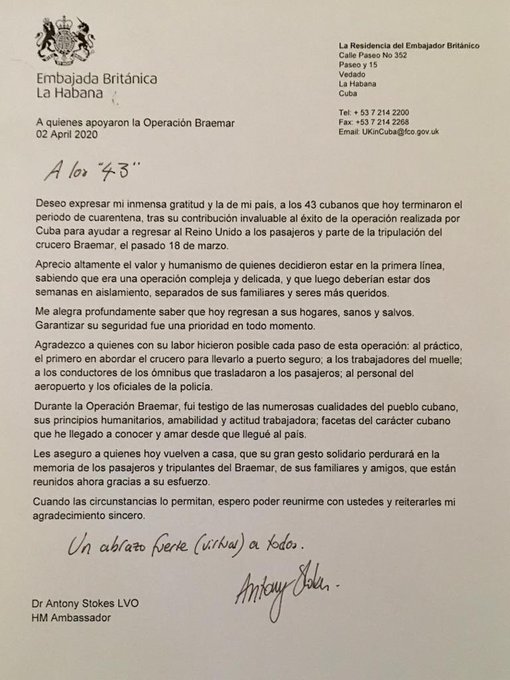 During Operation Braemar, I witnessed the many qualities of the Cuban people, their humanitarian principles, kindness and hard-working attitude; facets of the Cuban character that I have come to know and love since I came to the country.

I assure those who return home today that their great gesture of solidarity will last in the memory of the passengers and crew of the Braemar, their family and friends, who are now reunited thanks to their effort.

His letter concluded with a handwritten note extending “a big (virtual) hug to all”.

The Canary has previously reported, Cuba’s humanitarian efforts have been extensive during the coronavirus pandemic.

Throughout March, Cuba sent scores of doctors to countries most affected by the virus. By 26 March, Cuba had reportedly “sent 144 health workers to Jamaica, 136 doctors to Venezuela, and 50 doctors to Suriname”, as well as dozens to Italy.

Despite its humanitarian efforts, Cuba remains under a brutal US blockade which extends back to the Cold War era.