HAVANA, March 17th  International tourism has fallen dramatically in the first two months of 2021 in Cuba.

Compared to January and February of last year, the country has stopped receiving more than 95% of travelers, a decrease associated with the coronavirus pandemic.

“During the first two months of 2021, some 35,600 international travelers arrived on the island, representing 4.5% of the 792,507 foreign visitors totaled at the end of February 2020,” the academic and university professor José Luis Perelló informed the agency china Xinhua news.

In the context of the pandemic, international tourism has suffered a steep decline globally. Movement restrictions and measures to contain the spread have had a very significant impact on the sector. Due to the global expansion of the coronavirus, in 2020 international tourist arrivals worldwide fell by 74% compared to 2019.

The COVID-19 pandemic was the main cause of year-on-year decreases that reached 84 % in the Asia-Pacific region or around 70% in America and Europe, according to the statista.com website. Year-on-year variation in the number of international tourist arrivals in the world in 2020, by region / statista.com 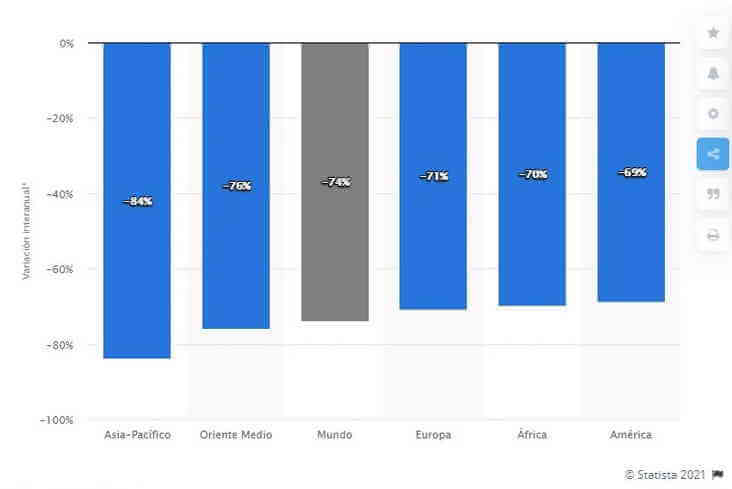 Although these are provisional data for 2020 compared to 2019, they indicate that the figures recorded by Cuba in the first two months of this year point to an even greater decline or a recovery that is dangerously postponed for the Cuban economy. The revival of tourism on the island will not only depend on the control of the pandemic at the domestic level, according to the specialist.
Progress in vaccinating Canadian, Spanish, German, English, and French citizens – the first on the list of visitors Cuba receive – will affect the recovery of the tourism sector. Likewise, Perelló stressed the importance of the recovery of mobility and the normalization of airport traffic as decisive factors for recovery.

The decrease in the income of a large part of the population whose activity has been affected by the pandemic has also contributed to the decrease in the number of visitors to the island. In this sense, Perelló explained that “people could be immunized and not have the income to travel.”

The global health emergency has also brought about the cessation of activity in other sectors of the economy whose workers have suffered a cut in their living standards, mainly affecting those leisure activities to which they used part of their income or savings.

As a result of the pandemic, last year tourism in Cuba registered a decrease of 74.6% with respect to the figure of 2019, according to the economist Elías Amor. With one million 85 thousand tourists, 2020 becomes “the worst result of the historical series published by the National Statistics Office of Cuba, ONEI ”.

The figure is well below the 4.5 million expected before the appearance of SARS-CoV-2, as acknowledged by Cubadebate.

For Elías Amor, “the data show a complicated scenario for tourism, the great strategic commitment of the economic authorities, with a very prominent impact on the income collected, overnight stays and hotel activity (which will have had to reduce its purchases from internal suppliers on the island, especially agricultural products), as well as direct consumption by tourists of goods and services during their stay ”.

According to his analysis, the “scenario that has no signs of improving in 2021, since the high season seems lost. They are not good omens either, as 2021 advances and the same trends continue in world markets, with the recessive effect on the whole of economic activity, employment and the generation of wealth ”.

Cuba’s tourism boom has many in remote areas worrying