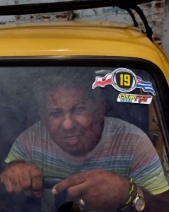 Evilio Aguilar poses with his Fiat Polski 126p in a garage in Havana, Cuba, Tuesday, August 10, 2016. An estimated 10,000 Polskis are registered in Cuba, according to aficionados. Photo: Ramon Espinosa, AP

HAVANA, August 11th  (AP)  Ramses Fernandez’s most cherished possession is barely larger than a refrigerator, with the legroom of an economy airplane seat and a little more horsepower than a riding lawnmower.

“That’s my second baby,” said Fernandez, smiling proudly at the 39-year-old automobile purchased about the time his 10-month-old son was born. “My wife says that car is my child.” A humble two-cylinder Polish-made hatchback, the Fiat 126p was forgotten by most people after the fall of the Berlin Wall. Decades later, the car lovingly known as the Polski is basking in a Cuban revival.

Buses and taxis are in short supply as Cuba struggles with cutbacks in subsidized oil from Venezuela. The average salary is about $25 a month, but government-controlled car and gasoline prices are among the highest in the world.
With around just 24 horsepower, depending on exactly how each one has been altered, the half-ton Polski offers families a shot at independent mobility for a few thousand dollars, a sum within reach of those able to save from private jobs or family sending money from overseas.

So the self-taught mechanics who’ve kept Cuba’s famed American sedans running for decades are turning their talents to this automotive artifact from the Cold War, equipping Polskis with stronger suspensions, more powerful motors, even high-end sound systems and upholstery.

“2016 has been the year of the Fiat Polski 126p,” said Hendy Coba, president of Friends of the Car, an officially sanctioned Havana car owners club. An estimated 10,000 Polskis are registered in Cuba, according to aficionados. Although many are out of service, thousands of others buzz along Cuban roads, literally overshadowed by the 1950s American behemoths known as almendrones, and even by the rattling Ladas and Moskovitches imported from the Soviet Union.

Fernandez, an auto mechanic, said he sold his motorcycle around the time of his son’s birth and bought his Polski with the proceeds, about $5,000. He’s equipped it with disc brakes, new tires, an upgraded gearbox and a water-cooled engine nearly twice as powerful as the one it came with.

The normally air-cooled Polski is so prone to overheating in Cuba that many owners drive around with the rear hatch open in an attempt to suck hot air away from the engine. Fernandez’s closed hatch, and his car’s relative nimbleness, makes him the object of constant admiring comments from other drivers at red lights.
“People love my car,” he said. “Everybody says, ‘What a beautiful vehicle!'”
Raul Seoane’s family saved years of remittances from relatives working in Spain and spent $2,000 for a well-worn red Polski manufactured in 1986. Seoane, a 32-year-old computer technician, said the family mainly uses the car to run errands, get to work and take older relatives to doctors’ appointments.

He’s been surprised by the number of tourists who ask to pose with the family vehicle. “Foreigners take photos as if they’ve never seen something like this,” he said. “For being an economical car, the Polski has really caught on.” US and Havana talk about oil in October
0 replies

The Arcades of Havana
Scroll to top