HAVANA, 23 May On a Friday night at Beth Shalom in January 2020, only 70 of the 270 synagogue seats were filled — at least a quarter of them by tourists.

Adriana Quiñones, 19, led the evening services, chanting at the bema in Hebrew beside her ex-boyfriend, Jonathan, in a highlighter-yellow dress.

While Quiñones can read Hebrew beautifully, she doesn’t actually understand what it means — a qualification that has been overlooked in light of the fact that the synagogue does not have a rabbi. 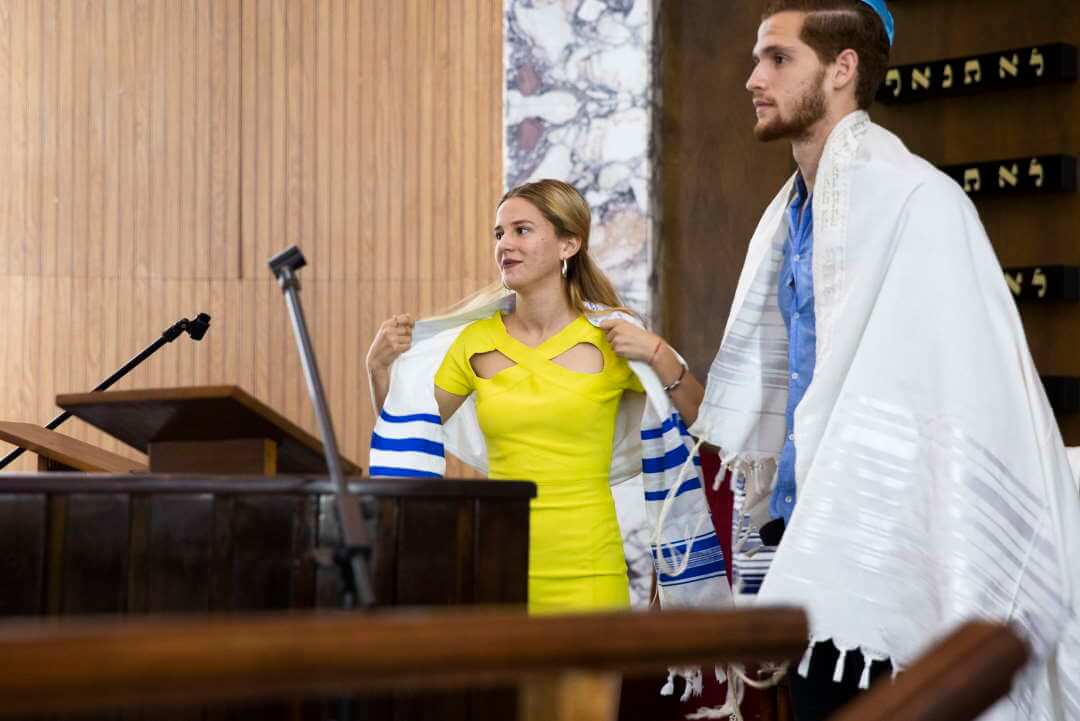 Adriana (“Adri”) Quiñones (left) leads Friday night services alongside her ex-boyfriend, Jonathan on January 17, 2020. About 70 people attended the service—a quarter of them tourists. Adri spends almost every Friday night, Saturday morning, and Sunday morning at the synagogue. Beth Shalom does not have a rabbi, so almost everyone in the congregation takes turns reading. Adri can read Hebrew but doesn’t know what it means.

There isn’t one rabbi living in the whole country of Cuba. Currently, only about 1,200 Jewish people still call the island home, down from 15,000 prior to Fidel Castro’s revolutionary rise to power in 1959.

Beth Shalom was built in Havana’s Vedado neighbourhood in 1952. It’s one of three synagogues in Havana and only five in all of Cuba. 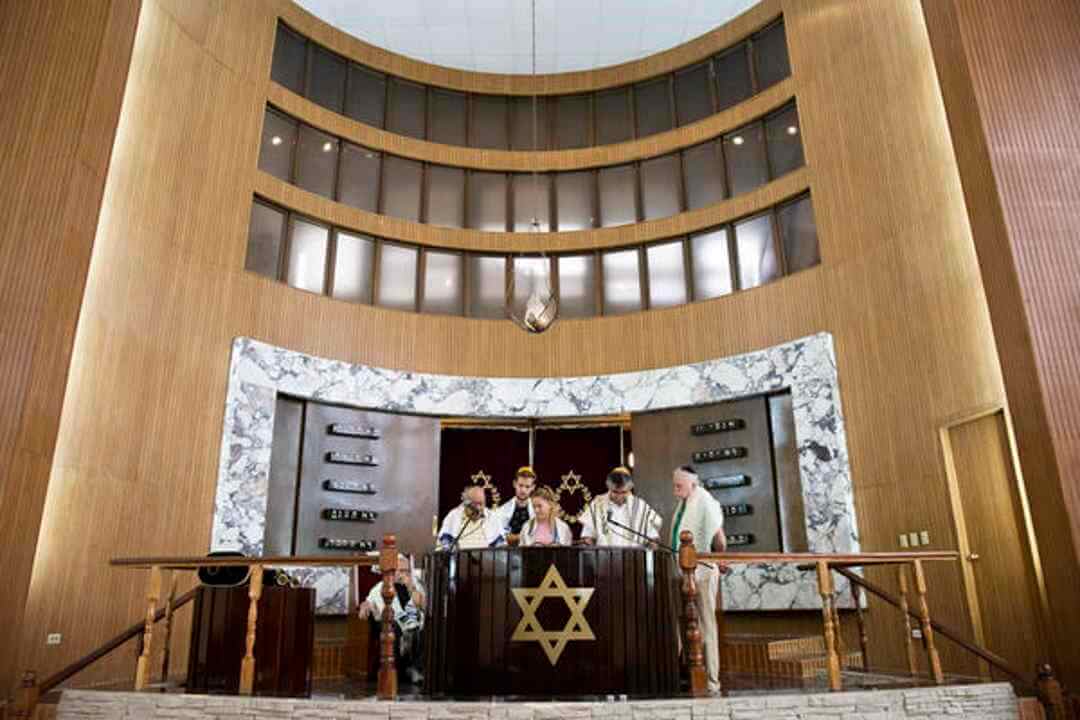 Most of Cuba’s Jewish population over the past hundred years has existed as a result of displacement and persecution elsewhere. Jewish people fled from Turkey and Eastern Europe in the 1910s and ’20s, then again from Europe in the 1930s and ’40s as Nazis seized power. Many considered Cuba a stopover point on the way to the U.S. but stayed after the U.S. shut them out.

Beth Shalom’s current president, Adela Dworin, is the child of Holocaust survivors. Quiñones’ paternal great-grandparents emigrated from Turkey after they faced discrimination, while her maternal grandparents are Cuban natives.

In deciding to remain in Cuba, the Quiñones family is part of a striking minority. After Fidel Castro came to power, more than 90% of Cuba’s Jewish population fled, primarily to cities such as Miami. Many were middle-class business owners who suffered under Castro’s economic policies.

Jewish people are a minority around the world — a tiny fraction of 1% — but particularly so among Cuba’s 11 million people. Their small numbers have made Cuba’s Jewish community extremely close-knit.

And like in other Jewish communities around the world, the onus for continuing the practice of the religion rests on the young. Quiñones is one of a small number of Cuba’s Jewish youth who are under immense pressure to preserve an already minuscule religious group.

When Quiñones was in her second year of pharmacy school at the University of Havana, she would travel an hour from her university to Beth Shalom each week — spending three nights at the synagogue for services, Sunday school, youth group, and recreational activities. 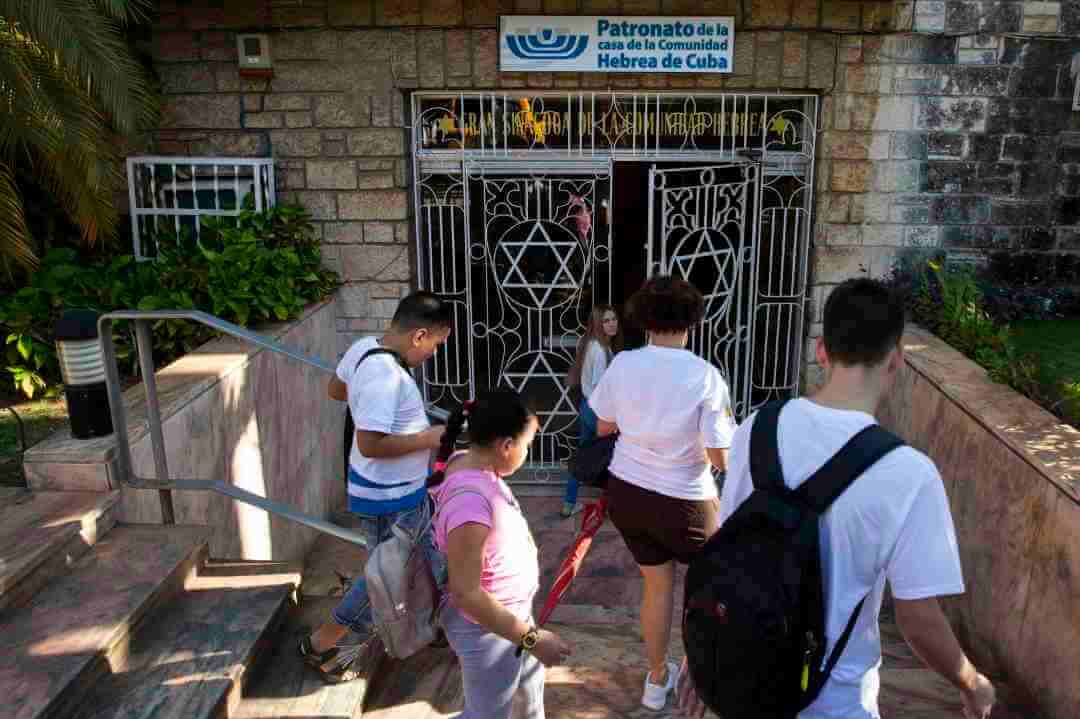 Adri, center, enters the synagogue to attend Sunday school on the morning of Jan. 19, 2020. At Sunday school, the congregation learns about other religions to increase understanding and tolerance. Adri’s father, Isac (not pictured) is a teacher at the school.

Alongside her friends, the other members of the youth group, Quiñones participated in dances, played hours of domino matches, practised ping pong, and learned to bake challah from Ida, another member of the congregation.

Quiñones was slated to attend the JCC Maccabi Games — an Olympic-style sporting competition held each summer in Israel — for ping pong in 2021, but the event was cancelled because of COVID-19.

As an explanation for her commitment to the synagogue, Quiñones offered, “Why would I want to be anywhere else? All my friends are here.” Besides, she said, her school classmates know so little about Judaism that they try to make fun of her with Islamophobic jokes, not knowing the difference between Islam and Judaism.

Since the onset of COVID-19, Beth Shalom has been closed to its congregation. Quiñones’ father, Isac, taught Sunday school each week. He’s now teaching virtually.

“We’re doing online activities, but it’s not the same,” Quiñones says. As for the coronavirus’s effect on all of Cuba, she says, “the situation is really bad.”

Cuba kept case numbers low in 2020, but they started rising in 2021, with more than 1,000 a day by May. Widespread vaccinations haven’t started. Cuba is not using vaccines from abroad, instead of developing its own vaccines, which are still undergoing trials.

The lack of tourists during the pandemic is hitting the Jewish community hard, as they rely heavily on tourism for service attendance, monetary donations, and simply a reminder that they are not alone.

Quiñones says, “I like that visitors from other countries come to our community. It makes me feel proud of it and also allows me to compare what we do here with what is done in other countries … and these visitors are what support the daily life of our community.” After more than a year at home, she says, “it’s hard … but there’s nothing I can do.”

“Really,” she says, “We need a miracle.” (Photos Rachel Wisniewski-www.kucb.org)