HAVANA, Sep 27 (RHC) With the objective that people have access to healthy, fresh, organic local food, the first Mercado de la Tierra, from Finca Vista Hermosa, arises in Cuba, which will also be included in the project of Slow Food.

The initiative is funded by Finca Vista Hermosa and Restaurante Mediterráneo Habana, which in 2013 initiated the Campo a la Mesa project; It will be located in Camino de la Esperanza, Bacuranao in the Guanabacoa municipality, Havana.

Vista Hermosa is part of the promoters of Finca Slow, a project founded with the objective of increasing visibility and support for agroecological agriculture that meets the mission and objectives of Slow Food in Cuba, said Ariel Coroas González, market coordinator.

In this place vegetables, milk, cheese, and meat are produced in accordance with the principles of social and environmental sustainability.

The Cuban Alliance of Cooks Slow Food participates in the new market by presenting cooking demonstrations and tasting workshops and promoting the consumption of traditional recipes based on healthy products, many of which can be purchased right there.

Damarys Relova Vento and Melissa Relova Posada, who are part of the community of this movement on the farm, explained that the market is a fundamental tool to meet all the local people involved with the Slow Food projects.

Also, they said, it serves to reconnect consumers of all ages living in the city with the land and to promote the philosophy that supports good, clean and fair food to as many people as possible. 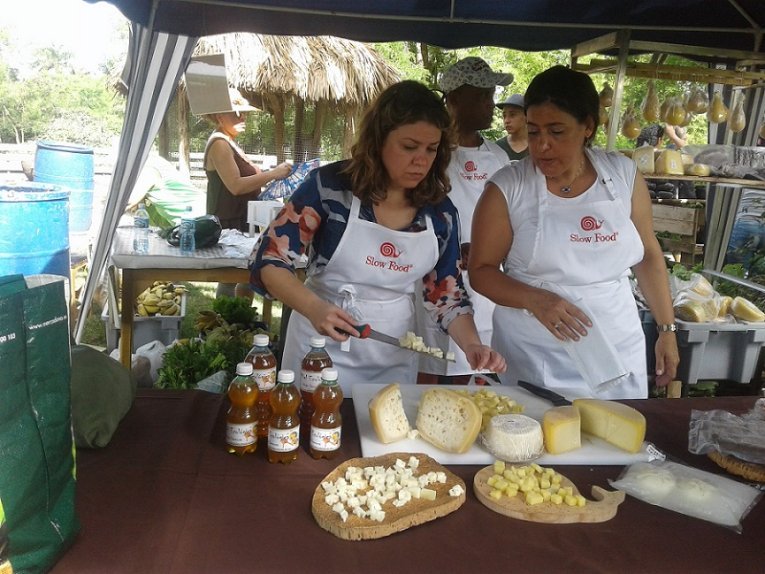 You can find in the market quail eggs, preserves (pickles, juices), fermented beverages and gastronomic specialties such as cut milk candy and Creole ajiaco, one of the most typical dishes of our country.

Those who visit the Earth Market will have the possibility to see food production on the farm, buy groceries, attend presentations and conferences as well as participate in other activities, such as horse and carriage rides, rodeos, milking contests and raffles of awards.

Slow Food is a worldwide network of local communities founded in 1989 to counter the disappearance of local food traditions and the spread of fast food culture; Today it is a global movement that involves millions of people in more than 160 countries.