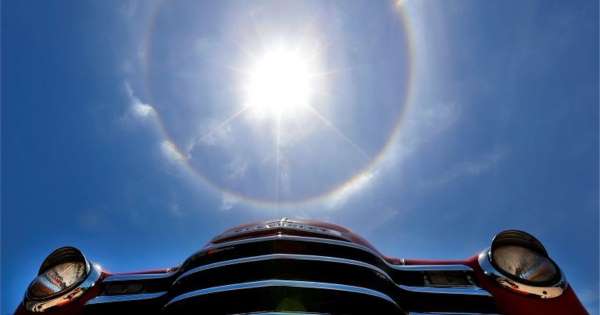 HAVANA, May 9th The ring around the sun seen this Friday surprised many in the capital of Cuba.Heaven in the city of Havana has given its inhabitants a double show in less than a week.

As happened on May 2, this Friday, Cubans could see a solar halo from various points in the capital, which generated great expectation.

The event this Friday was even bigger because at times a double ring was seen around the Sun, as reported by the Forecast Center, of the Cuban Institute of Meteorology, through Twitter.

The optical phenomenon was captured in photographs that were shared on social networks.

But what are solar halos and how are they produced?

A solar halo, also called antelia, is an optical phenomenon of meteorological origin that is produced by the passage of light towards a particular type of cloud: the cirrus.

The refraction of light through ice crystals or water droplets that are present in these clouds, which move at high altitudes, generates the ring around the sun.

Sometimes the cirrus is so thin that we are not aware that there is any cloud in the sky. However, when passing in front of the Sun, the refraction of light in the ice crystals causes the halo to form.

The phenomenon is usually seen simply as a white ring, but sometimes there is such clear refraction that a separation of colours is generated, as seen in Havana.

It can occur anywhere in the world where these factors come together, but it is more frequent in regions with cold climates.

Moonlight can also generate halos. Although less frequent, when there is a clear night with a full moon, the thin layer of cirrus moving across the sky can have the same effect.