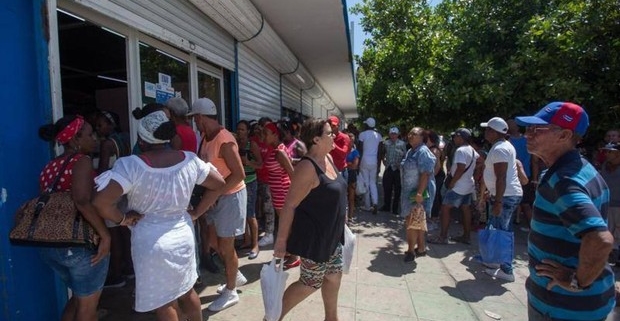 HAVANA, May 24 (EFE) “Do you know which animal has the longest tail in Cuba? There you have the answer: look at the tail of the chicken. ” The valet parking at the TRD 84 and 7th supermarkets in Havana points to the group of about thirty people who crowd in front of the door awaiting their turn.

The “chicken tail” has been replicated for weeks in establishments throughout the island. Although the jokes usually brighten the wait, there are also heated discussions and even fights that are recorded and shared on social networks, turning this phenomenon into the main focus of attention of Cuban society and symbol of the incipient economic crisis that hits the country.

“Before you went to the store and bought things. Now you have to do bitches and kill yourself in this, “protests Mirta, a retired woman who expresses her indignation after the first hour of waiting at the doors of another supermarket in the Havana neighborhood of Miramar.

Mirta adds: “I have been in other countries and there is no passing the work that is happening in Cuba. It is true that in socialism there are many good things but there are also very bad things that those at the top do not see “.

In the same row – this one of about fifty people – two women accuse each other of having sneaked in, initiating a loud discussion. “The tail of the chicken is the worst, because there is no food, and that’s why people are like that, killing themselves,” exaggerates Miriela, another young woman who waits her turn.

In the tail of the chicken there is an inviolable rule: two packages per customer.

This restriction, imposed by the Government on several basic products to avoid hoarding, collides with the picaresque Cuban, since many go to the supermarket with their children or nephews and even pay a CUC (equivalent to one dollar) to third parties to swell the row and give them their share of the prized white protein.

The aggravated shortage of products is an indication of the economic crisis that begins to hit hard to this country of 11.2 million inhabitants whose food depends between 60 and 70% of imports, as is the case of avian meat.

Cuba’s endemic problems, such as the inefficiency of its centralized economic model and the accumulation of debts, have recently joined the tightening of the embargo by the US Administration of Donald Trump and the instability of the Government of Nicolás Maduro in Venezuela, provider of half the fuel that moves the island.

The Cuban authorities are aware of the difficult moment, to the point that the former president Raul Castro warned that we must “prepare for the worst variant” of the economy.

Wheat flour, oil, eggs, milk powder and sausages, together with blankets or cloths to clean floors, have been since the end of last year the main articles victims of shortages.

In the case of chicken, the supply has been reduced to a lesser extent. “This week came chicken every day,” state supplier Sergio Sanchez, from the municipality of Playa, told Efe.

So, why does the flesh of this bird form such agglomerations, not seen in the case of other foods?

The answer is multiple and it is also on the street. On the one hand, “the pig is impossible,” laments Marisa, head of the family with four children and six grandchildren at home, who has seen the price of pork swell in just a few months, while the affordable and always sausages have disappeared. of refrigerators.

She purchases the rations stipulated in the “passbook” or ration card assigned by the State each month: 3 kilos of rice, 4 kilos of sugar, half a liter of soybean oil, mixed coffee, a packet of pasta, 15 eggs , 300 grams of grains and two “postures” (450 grams) of chicken. It is a minimum base that each Cuban must complement on his own in the free market to survive for the next thirty days.

To the increase of the pig adds another problem: “there is much reseller. They line up with four boys from their house and then sell the most expensive chicken. The 6.25 CUC package is being sold at 10, the 8 to 15, and so on “, says Marisa.

“I do not even go near the supermarkets. Before I wait four hours I prefer to pay more to the reseller who brings it home, “says Marta, a young Havana woman of 29 years. She does not do the tail of the chicken because the remittances from her relatives from the United States provide her with a higher standard of living than the average Cuban, whose salary in the public sector is around 30 CUC per month.
First published in EFE