HAVANA,1 Junio (PL) With a dozen collaborations by musicians from Cuba, Brazil and Spain, Cuban singer Telmary on Friday released her new ‘Maradentro’ CD, which is available on virtual platforms.

Also noteworthy are the songs with Ana Torroja (a former member of the Spanish pop band Mecano) and Munir Hossn, from Brazil, who joined the project, launched under the Colibri music label.

‘The blessed waters have arrived, full of charms to drive waves, algae, shells, all the strength of the echo of the depths,’ the rapper announced on her Facebook profile.

Join this intense swing, full of love, rhythm and melody, noted the singer, who celebrates with this album her 20 years of artistic career, after the albums ‘A Diario’ (2007), ‘Libre’ (2014) and ‘Fuerza Arara’ (2018), for which she deserved the Cubadisco Award in urban music and nominations for the Latin Grammy and Canada’s Juno Awards.

Dedicated to Yemaya, a deity of the Yoruba religion, the album constitutes the point of convergence of the muses of Telmary, who bet on a sonority that invites to think and dance. 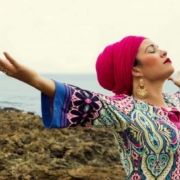 Telmary and Habana Sana in online concert from Cuba