HAVANA, Oct. 11th The artist and activist Tania Bruguera has called on the art world to boycott the 14th Havana Biennial next month,

saying that it is “immoral” to travel to Cuba for “parties and mojitos in a fun bubble when there are so many people [there] who have been wrongfully imprisoned”.

At the human rights conference, the Oslo Freedom Forum, last week Bruguera told delegates that the biennial, which is due to open 21 November, is “another piece of [government] propaganda”.

She tells The Art Newspaper that “the ministry of culture is using the biennial to erase the fact that more than 500 Cubans are in prison for the demonstration held on 11 July; hundreds more are still under house arrest awaiting trial including a dozen artists”. The organisers of the biennial, described online as “freelance Cuban visual arts specialists”, did not respond to a request for comment.

In July, thousands of Cubans on the island took to the streets in one of the largest mass protests the country has seen since Fidel Castro’s 1959 revolution. People marched against hyperinflation, growing inequality, a lack of food, medicine and the government’s mishandling of the coronavirus pandemic.

The protests built on rallying calls for a freer Cuba, led by artists including Hamlet Lavastida and Luis Manuel Otero Alcántara who have been arrested numerous times over the past few years for anti-government, pro-free speech performances.

“The Cuban government wanted to portray these as a few delinquents causing trouble,” Bruguera said at the Oslo Freedom Forum. “But in reality, this was the biggest uprising in Cuba since the revolution… this is the most spontaneous action to take place across the island during the 62-year dictatorship.” She says that 1,088 people were arrested on 11 July, who effectively became “political prisoners”.

Bruguera left Cuba in August to take up the post of senior lecturer in media and performance at Harvard University in Massachusetts; she says she only agreed to depart the country if the government pledged to release a group of prisoners including the rapper Maykel Castillo Pérez.

Bruguera says that as far as she is aware, however, Otero Alcántara is still detained by the Cuban authorities. “Havastida was released as part of the agreement with me; we are working on the release of Otero Alcántara,” she says.

In January, Bruguera, the journalist Mauricio Mendoza and many other artists and activists were arrested in Havana for their involvement in a protest at the Ministry of Culture during which the culture minister, Alpidio Alonso, was recorded physically striking at a demonstrator.

“How can we attend a biennial when the culture minister slaps an artist? We are not talking about censorship anymore; we are talking about artists’ lives being in danger,” Bruguera says.

The demonstration took place two months after hundreds gathered to stage another peaceful action in front of the Ministry of Culture demanding freedom of expression following the passage of Decree 349, a law passed late 2018 that requires artists to register for a government-issued licence in order to create work. (www.theartnewspaper.com) 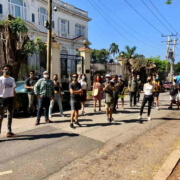 Guide with enterprises and state and private businesses in Cuba released