HAVANA, Jan. 28th The Cuban artist Tania Bruguera, the journalist Mauricio Mendoza and many other activists and artists were arrested in Havana

for their involvement in a protest at the Ministry of Culture on 27 January, during which the culture minister was recorded physically striking at a demonstrator.

Several messages from Bruguera were posted on social media, including a video in which she states that “Cubans cannot accept that there are artists in prison” and that protestors were arrested after responding to invitations for a “dialogue” with the culture minister Alpidio Alonso.

In videos and photographs recorded by several people present, the culture minister can be seen swiping at Mendoza, a journalist for the Diario de Cuba, and knocking down his cell phone. The demonstrators were then arrested and taken onto a bus, where many said they were further attacked by police.

Alonso was accompanied by the vice-ministers of culture Fernando Rojas and Fernando León Jacomino in the confrontation with protestors. Activists have called for the resignation of all three, as well as Cuban President Miguel Díaz-Canel Bermúdez, in a petition that has steadily gained signatures.

The demonstration on Wednesday took place two months after hundreds gathered to stage another peaceful action in front of the Ministry of Culture demanding freedom of expression after the passage of Decree 349—a law that went into effect in late 2018 that requires artists to register for a government-issued license in order to create work. It was also planned as a tribute to the Cuban writer and revolutionary José Martí, a pivotal figure in Cuba’s independence from Spain who fervently advocated for intellectual freedom in the country.

“We gather again to ‘cultivate and offer’ our white rose,” the members of the 27N movement (named after the November protests) posted on Facebook, referring to a poem by Martí, “of peace, dialogue, civic friendship, reconciliation, forgiveness, transparency, goodness, beauty, poetry.

A white rose for friends and for those who consider themselves enemies, as Marti proposed because we believe in the importance of building Cuba ‘with all and for the good of all’.”
(www.theartnewspaper.com) 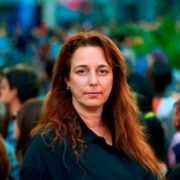