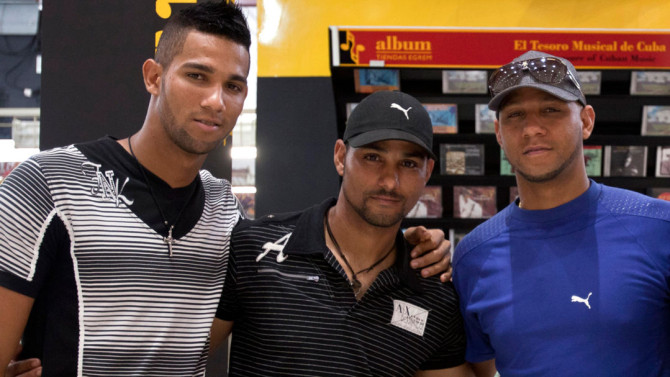 HAVANA, Feb. 8th (AP)  Star Cuban infielder Yulieski Gourriel and his younger brother slipped away from their hotel in the Dominican Republic early Monday in an apparent effort to launch careers in Major League Baseball.

The departure of Yulieski and his brother Loudes was confirmed with remarkable swiftness byGranma, the Communist Party newspaper in Cuba that serves as an outlet for official government statements.

The paper said on its website Monday morning that the Gourriel brothers had “abandoned” their hotel in “an open attitude of surrender to the merchants of professional baseball for profit.”

The elder Yulieski has been one of the Cuban players most highly sought after by MLB scouts since he played in his first World Baseball Classic in 2006. His brother was also considered a good prospect.

The brothers took off before dawn hours after the close of the annual Caribbean Series, according to a baseball official in the country who spoke on condition of anonymity.

Cuban sports officials contacted Dominican police for help in locating the 31-year-old Yulieski and his younger brother, Lourdes, said the official, who was not authorized to discuss the issue.

The brothers did not publicly disclose their plans. But Cuban players in the past have established residency in the Dominican Republic and then signed contracts to play in Major League Baseball.

Yulieski Gourriel’s departure from Cuba is a major defeat for the country’s attempt to prevent massive flight of baseball talent by allowing players to sign professional contracts with leagues in third countries such as Mexico and Japan.

Gourriel was the most prominent example of the experiment that began in 2013, making $1 million playing for the Yokohama Dena Baystars, then returning to play a season with his pro team in Havana.

After accounting for Japanese taxes, he paid 10 percent to Cuba’s baseball federation (which acted as his agent). The Japanese team canceled his contract last spring after saying Gourriel had told them he was injured and needed to recuperate in Cuba.

Cuban and U.S. baseball officials are working to create a legal framework for Cuban players to join the major leagues, but for the moment both Cuban law and U.S. law contain restrictions that make it impossible.

Yulieski and Loudes were in the Dominican Republic to play for The Tigers of Ciegos de Avila. A 7-2 defeat Saturday against Mexico kept the Cuban team out of the finals of the series.