HAVANA, May 14th (Reuters)  A crew member aboard a Cuba-flagged oil tanker on its way from a Mexican shipyard to Venezuela was reported missing this week, END_OF_DOCUMENT_TOKEN_TO_BE_REPLACED

HAVANA, March 7 (EFE)  The vice president of Venezuela, Delcy Rodríguez, will make a working visit to Cuba on Monday, END_OF_DOCUMENT_TOKEN_TO_BE_REPLACED

HAVANA, Oct. 3th At least three Venezuelan fuel tankers are heading towards Cuba today, part of a flotilla meant to free up domestic storage space while defying a US campaign to cut off Venezuela’s oil supply to Cuba.

END_OF_DOCUMENT_TOKEN_TO_BE_REPLACED

HAVANA, March 22th Cuba would have to spend nearly $2 billion a year to meet its domestic oil needs if Venezuela’s National Assembly and interim president Juan Guaidó manage to stop deliveries to the Caribbean island.

END_OF_DOCUMENT_TOKEN_TO_BE_REPLACED

HAVANA, March 12th The interim president of Venezuela, Juan Guaidó, has decreed the cessation of oil shipments made by the Government of Nicolás Maduro to Cuba, for which he has requested the help of the international community that supports and recognizes him. END_OF_DOCUMENT_TOKEN_TO_BE_REPLACED 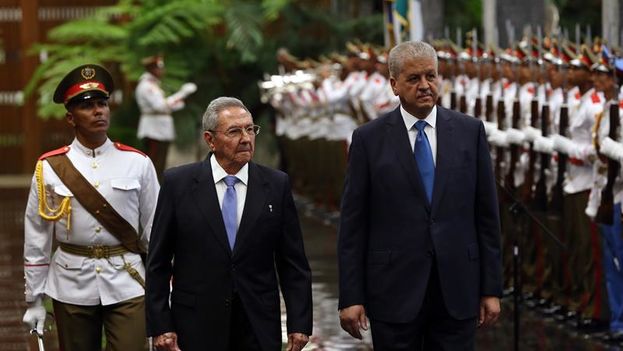 HAVANA, Jan 31th  (Reuters) – Cuba said on Tuesday it had signed a deal with Algeria to import fuel over the next three years, as it seeks to offset a steep decline in oil shipments from its key ally Venezuela.

END_OF_DOCUMENT_TOKEN_TO_BE_REPLACED

HAVANA, July 28th   Venezuela’s grim situation is impacting not only millions of households around the country — it is also sending panic waves across the Caribbean all the way to Cuba, a solid ally that for decades now has relied heavily on Chavismo’s generosity.

Cuba, has alienated itself from the rest of the world and has largely relied on Venezuela to stay financially afloat. But Venezuela’s falling oil prices is causing Cuba to distance itself from the South American country.

So far this year Venezuelan oil shipments to the island have declined by 19.5 percent, forcing an energy rationing that is reminding people of the early 90s, when the Soviet Union dissolved and Cuba lost its top provider almost overnight.

Now with Venezuela’s wealth slowly fading away, the geopolitical chessboard may change in a way that some say will inevitably drive Havana closer to the U.S.

“Cuba’s opening to foreign investment has been slow, but now they don’t have another option if you consider Venezuela’s grim situation,” said Felix Arellano, also an internationalist.

Venezuela and Cuba started strengthening ties soon after Hugo Chavez, a socialist and open admirer of Fidel Castro, came to power in 1999. The alliance, fueled by a close personal friendship, helped the Castro brothers keep the island afloat amid the Soviet Union domino collapse.

Currently – and for more than a decade now – Venezuela supplies more than 50 percent of the island’s intake of oil at very preferential terms. In exchange, starting 2003 Cuba started providing human resources to Venezuela, mostly teachers and medical doctors to support Chavez’s various social programs, like Barrio Adentro and Misión Robinson, which focused on reducing analphabetism.

According to the most recent information available, in 2013 Venezuela provided Cuba with 99,000 barrels of crude oil a day. To date, Cuba has sent approximately 200,000 workers to Venezuela.

This oil-for-workers deal greatly benefitted both Castro’s and Chavez’s agendas: while Cuba kept running on cheap oil, Venezuela found a way to secure and preserve the social programs that are the backbone of Chavismo.

After Chavez died in 2013, his handpicked successor Nicolas Maduro kept the close relationship with Fidel and Raul Castro — according to an FNL count, Maduro has visited Cuba 15 times since becoming president three years ago.

“The new economic scenario doesn’t mean that political relations between Cuba and Venezuela will turn sour,” according to foreign analyst Edgar Otalvora. “Ideologically, they will remain close,” he said, pointing at Raul Castro’s cautious speech before the National Assembly on July 8th.

However, Castro did turn heads when he acknowledged the repercussions that Venezuela’s deepening crisis is having on Cuba.

He said Cuba’s economy grew just 1 percent in the first part of the year, half of what the government had planned for, due in part to “a certain contraction in the fuel supplies agreed upon with Venezuela, despite the firm will of President Maduro and his government to fulfill them.”

“Logically that has caused additional tensions in the functioning of the Cuban economy,” Castro told the National Assembly.

Analysts say the severity of the financial and political crisis in Venezuela may force Cuba to change course sooner rather than later.

“Havana needs to also start drawing investments from Europe, Brazil, Canada and China,” Arellano told FNL. “The down part for the Castro brothers is that this might require political changes in the near future.”

As for the U.S., it is very likely Washington will keep pushing to increase its influence in Cuba regardless of November’s election outcome.

“American investors are betting big on Cuba, which will probably result in the ease of the U.S. embargo [over the island] in the near future,” De Michelle said.

“This will improve the wellbeing of the Cuban people and will make Venezuela’s aid less necessary,” the expert added.

Another scenario is that Venezuela’s opposition keeps gaining ground and, if and when in power, brings to a halt the financial aid it has publicly condemned more than once — many say Cuba is benefitting way more than Venezuela with the current arrangement.

“The loss of the Cuban doctors wouldn’t be such a big problem for Venezuela, given the fact that some of them just work as spies and they can be replaced with our own doctors,” Arellano said.

On top of this, it is no that secret many of these social workers have used their appointment to Venezuela as an opportunity to flee the island’s regime.

According to Colombian authorities, in 2015 as many as 720 Cuban medical doctors entered to their territory from Venezuela. Hundreds of them then requested U.S. visas.
http://latino.foxnews.com/latino/news/2016/07/27/venezuela-cuts-oils-shipments-to-cuba-forcing-castros-to-consider-veer-to-us/