HAVANA, Dec. 28th The expected sixth part of Pirates of the Caribbean, one of the highest-grossing film sagas of the 21st century, will be partially filmed in Cuba, END_OF_DOCUMENT_TOKEN_TO_BE_REPLACED

END_OF_DOCUMENT_TOKEN_TO_BE_REPLACED

HAVANA, Jan. 25th  (Xinhua)  Havana’s skyline is gradually looking glitzier as luxury hotels rise above the cobblestone streets of the capital. In the past year and a half, the island’s first two luxury hotels, considered five-star-plus, have opened in the city’s historical downtown area, known as Havana Vieja, or Old Havana.

END_OF_DOCUMENT_TOKEN_TO_BE_REPLACED

Together with his son Roman, also a movie director, and his grandsons Gia, Pascale Electra and Marcello Archimedes, Ford Coppola will be in this capital until Sunday.

During his visit, Ford Coppola will meet Roberto Smith, president of the Cuban Institute for Art and Movie Industry (ICAIC).

The famous movie director and producer, who directed unforgettable films such as “The Godfather”, “Apocalypse Now”, “Dracula” and others, showed a great interest for talking to the Cuban young filmmakers and know about their artistic aspirations.

Coppola will discuss in coming days, from his vast experience, some film productions by novice directors who are now in Cuba.

The also producer and screenwriter, winner of five Oscars, has been described by critics as one of the essential names of world cinema.

Just a month ago, Ford Coppola received in Spain the Princess of Asturias Award for the Arts, because the jury believed his name and figure is essential to understand the transformation and contradictions in the film industry and art, to which growth he has contributed decisively. 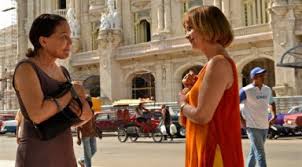 At a press conference, Piard offered details on the film that is divided into three true stories related to the topic of emigration, distance and reunions.

From a different aesthetic perspective of the Cuban cinema, the filmmaker emphasizes on the beauty, recreated through the lens of the experienced cinematographer Raul Rodriguez.

Love and friendship prevail as threads of the plot and invite the viewer to engage in a participatory dialogue with the stories of the film.

Havana is the setting chosen by the filmmaker because according to him, only in Havana you can make a movie like ‘La Ciudad’.

On the other hand, the Cuban singer Patricio Amaro created the original music of the film, after his first experience in the movie’Kangamba’.

Produced by RTV Commercial and Cubavision, and with the collaboration of the Cuban Institute of Cinematographic Art and Industry (ICRT), the film ‘La Ciudad’ will be premiered in the country on 16 July.