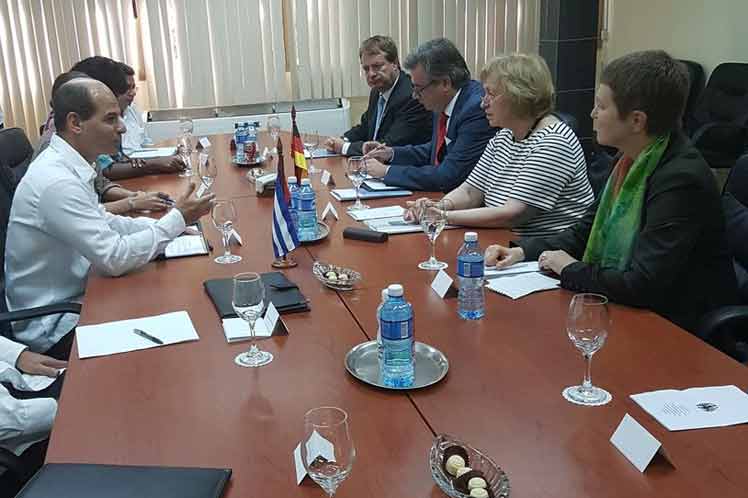 HAVANA, Feb. 5th On a recent morning, Martin Staub was stopped by two policemen in the Cuban capital Havana. The German businessman was asked to pay a fine for riding a bike in the wrong direction on a one-way street.

But when the police found out that Staub was riding an electric bike, they proposed a race – saying that if Staub won, he wouldn’t have to pay the fine. In the race that ensued, the policeman narrowly managed to win.

Over the past two years, Staub has been selling bicycles with elongated steel frames, sweeping arms, deep seats and wide tires in the German city of Saarbrücken. And now he’s setting his sight on the Cuban market.

New rules
Cuba’s economy has been undergoing a transition in recent years, with certain sectors being opened to private investment and the setting up of a special economic zone around the Mariel Bay in Havana – to encourage foreign firms to set up businesses there.

A year and half ago, a new foreign investment law also came into effect, changing the rules of the game. Even German Economy Minister Sigmar Gabriel recently paid a visit to the Caribbean island nation.

“The new investment law attempts to lure investors by offering them a variety of incentives, including tax benefits, duty-free imports, temporary residence permits and the opportunity to acquire property on the island,” said Staub. In addition to the incentives, the desire to be a part of the change taking place in Cuba drove Staub’s decision to invest in the country.

Initially, Staub had pondered various business options such as photovoltaics, waste management and brewing; but he later abandoned them due to high investment costs, and then opted for bicycles. “I knew two bicycle makers from Saarbrücken, who make self-designed bicycles,” he said.

Big hurdles for SMEs
Staub had previously worked for a financial services company for 30 years. The first time he traveled to Cuba was in the 1990s, during a period of severe economic crisis following the collapse of the Soviet Union. The dismantling of the communist bloc led to a plunge in Cuba’s foreign trade.

Still, Staub was impressed by the island nation, with its sun shine and tropical climate, and has since regularly visited Cuba. “The business idea involving bicycles is the result of my passion for Cuba as well as the nation’s economic opening,” he underlined.

Originally, Staub had intended to manufacture the bicycles in Cuba and export them worldwide. However, the businessman later scrapped his initial plan as the Mariel special economic zone, where he wanted to set up his manufacturing facility, required him to rope in an international consultancy firm to conduct a feasibility study.

“The high costs associated with such studies would have led to my wasting a quarter of my investment money,” he said, stressing that the Cuban government mainly aims to lure large companies such as Siemens, Volkswagen and Bosch to set up plants at Mariel, and not small and medium-sized enterprises.

E-bikes as USP
This is why Staub continues to manufacture his company’s e-bikes in Germany, with cooperation from Saarland-based engine maker Hitec.Their sale, too, has so far been limited to Germany.
As a first step, Staub now aims to launch an e-bike renting company in Cuba. And to this effect, he has been engaging in negotiations since last November with Cuba’s tourism ministry and travel agencies.

The businessman says both the authorities and travel agencies have expressed their interest in the project. Even German travel agencies operating in Cuba, he pointed out, have responded positively in hopes that e-bike tours would turn out to be their unique selling proposition (USP), thus helping them stand out from their competitors.

Staub initially wants to limit his company’s operations to Havana and its neighboring cities, as the entire infrastructure involving charging stations, workshops and equipment for carrying out repairs have to be set up.

The project is expected to take off as soon as an agreement is reached with the Cuban partners, Staub said. There are, however, a few uncertainties and legal hurdles that need to be dealt with.

“It takes a lot of passion and much perseverance to do business here,” says Staub. “There is no formula about how to open a company here. We are in an experimental stage, and we need time, patience and understanding of the other culture.” Then he jumps on his electric bike to take another ride through

HAVANA, Jan. 8th  (AFP/Reuters) The memorandum, signed by Sigmar Gabriel (above, center) at the start of his two-day trade visit on Thursday, could prove to be beneficial to German businesses seeking to invest in Cuba, and potentially increase the current 225 million euros ($244.22 million) in annual bilateral trade.
Speaking at the launch of a forum of German businesses and Cuban government officials, Gabriel said the deal marked “the start of a very dynamic process for our bilateral economic relations.”
“Part of this process will also surely be to modernize our political relations,” the vice chancellor added.
“There were difficult times for economic and political cooperation, and now is a good time to change that.”
Echoing Gabriel’s sentiments, Cuba’s foreign trade minister, Rodrigo Malmierca, said he too saw “great potential” to strengthen ties as Cuba reforms its economy.

Cold War tensions
Prior to the reunification of Germany in 1990, West Germany was a rival of Communist Cuba, with Havana a staunch ally of the Soviet-controlled East.
Over the past 25 years relations have thawed, and Germany is now Cuba’s fourth-biggest European trade partner. In 2014, their bilateral trade was worth $378 million.
After Canada, Germany is also Cuba’s second-biggest source of foreign tourists in the world. Between January and November last year, more than 154,000 Germans visited the island.
Global attention

Following its historic move to restore diplomatic ties with the US last year, Cuba is quickly gaining interest from companies around the globe.
During his visit, Gabriel was due to meet with his Cuban counterpart Miguel Diaz-Canel and other cabinet ministers. Also on the agenda was a visit to gas-bottling Oxicuba S.A., where German industrial gases supplier Stefan Messer GmbH has been involved in a joint venture with the Cuban government since 2001.

HAVANA,  July 16 In a further sign of the radical shift in relations between Cuba and the democratic states of the West, Steinmeier will make the first visit of a German foreign minister to Cuba when his plane arrives in Havana on Thursday morning.

On the agenda for Steinemeier during his two-day visit are talks with opposite number Bruno Rodriguerz as well as discussions with other members of the cabinet and meetings with artists and sportspeople.

The last time a representative of the German government visited Cuba was 14 years ago.
There are currently no plans for a meeting with President Raul Castro or his brother Fidel.
Steinmeier is to set out the case for seeing Cuba’s relations with the European Union strengthened.

Since 2014 new negotiations have been underway between Havana and Brussels over a political dialogue.

Amnesty International has called on Steinmeier to bring pressure to bear on Cuba over its patchy human rights record during the visit.

Amnesty International Germany’s head Selmin Caliskan said that in Cuba “it is still practically impossible to openly criticize the government.”

Steinmeier must impress upon the Cuban government the importance of every Cuban being able to enjoy their basic rights, said Caliskan

Cubna has step-by-step opened itself up to the outside world in the previous few years.

On Monday the USA and Cuba are to make the warming of relations between the two states official by re-opening their embassies in one another’s capitals.