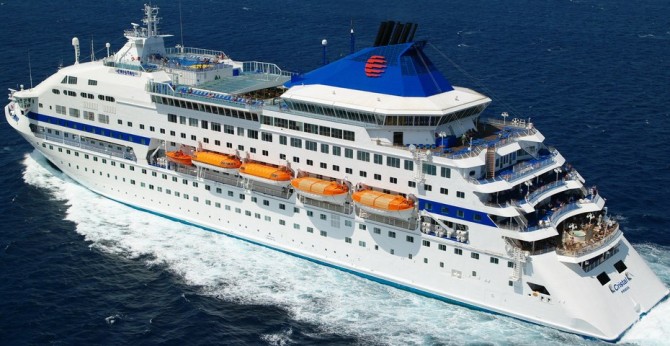 Like MSC Cruises, Celestyal Cruises can operate in Cuba as an international company, and now it’s expanding to legally accommodate U.S. citizens by bookings made through a U.S. tour operator partner or directly with Cuba Cruise and registered for a People-to-People Cuba Cruise program with U.S. non-profit organization Fund for Reconciliation and Development (FFRD).
Such cultural exchange travel programs are currently allowed by the U.S. government.

Celestyal Cruises hosted a reception attended by USA and international ambassadors and diplomats. There Captain Giannis Fountoukas said, “this year Cuba Cruise is promoting its product in North America as a complete, all-inclusive proposition comprising five shore excursions and our All-Inclusive Drink package.

The cruise will embark every Monday from Havana, and every Friday from Montego Bay, for the duration of the season. With 12,000 bookings and confirmed passengers to date, we are expecting our third season to be our most successful so far.”

U.S. citizens can cruise to Cuba on an extensive people-to-people itinerary detailed in part below:

DAY 1 – EMBARKATION IN MONTEGO BAY
Celestyal Cruises welcomes guests aboard the Celestyal Crystal (pictured above) in Montego Bay, Jamaica; home to fishing villages and reggae music. In the afternoon, Professor Jorge G. Arocha primes passengers on Cuba with a discussion on its visual arts, and at night, Cuban dance instructors get the party started with salsa lessons.

DAY 2 – SANTIAGO DE CUBA
Santiago de Cuba is the second-largest city in Cuba, and here a tour features a meeting Dr. Martha Cordié Jackson, historian and director of the African Cultural Center “Fernando Ortiz.” A dance performance and memorial and Moncada Barracks visit follow before either lunch onboard or a trip to the colonial central square of Santiago.

On the ship in the afternoon, Professor Arocha talks about Cuban history from Christopher Columbus to the Cuban-Spanish-American War. Guests also get a chance to meet the Cuban staff. Then the evening is full of rumba teaching and dancing.

DAY 4 – HAVANA
A guided tour of Havana focuses on Paseo del Prado (the Promenade), the Grande Teatro de Havana, the Capital Building, Plaza de la Revolución, the Jose Martí Memorial, the National Library and the San José Market. Dinner is served onboard or can be enjoyed locally along with the city’s evening scene at the Tropicana or Buena Vista Social Club.

DAY 5 – HAVANA
Another day in Havana delves into music with the “Cuba’s Unconventional Musical Instruments” demonstration and an Afro-Cuban dance performance. Further exploration of the city, Old Havana, the Museum of Fine Arts and more follows. Back on the ship, guests will enjoy a Cuban ecosystem presentation and more Cuban dancing and music.

DAY 7 – CIENFUEGOS
Cienfuegos is known as “the Pearl of the South,” where touring highlights the University of Cienfuegos, the Plaza de Armas, the Teatro Thomas Terry and the Graphic Society of Cienfuegos.

Cruisers can stay in the plaza for more time or return to the ship for lunch. Later, Professor Arocha talks about the African and European influences on Cuban music, and at night, Cuban mixologists instruct guests on how to make regional cocktails. The evening brings several dances together: cha-cha-cha, mambo, and salsa.

DAY 8 – MONTEGO BAY
Back at Montego Bay, guests disembark the Celestyal Crystal and return to the airport.

In this Jan. 3, 2015 file photo, people watch The Thomson Dream cruise ship leave the bay just after sunset in Havana

HAVANA ,July 9  (AP Peter Orsi)  Cruise ship tourism to Cuba spiked more than five-fold over the last three years and is up even higher so far in 2015, government officials reported Thursday.

In a statement published on the state-run website Cubadebate, the Transportation Ministry said the number of cruise ship port calls rose from 24 in 2012 to 139 in 2014, while visits by cruise passengers saw a similar jump from 6,770 to 37,519 during the same period.

Already this year there have been 174 port calls and 62,183 passenger visits through May, according to the ministry’s statistics.

The statement called the cruise industry an “important element of tourism development for the country,” and said further growth is expected.

The report comes two days after U.S. cruise company Carnival announced a plan to begin running ships to the Caribbean island through its new brand, fathom, which focuses on trips in which passengers sail to a destination in order to volunteer there.

Amid a gradual thaw between Cold War foes Washington and Havana, Carnival has secured permission from the U.S. Treasury Department but is still awaiting approval from the Cuban government.

The Cuban Transportation Ministry said growth during the last three years “could have been even greater if not for the inhuman measures imposed on us by the U.S. blockade (embargo) which substantially hurts maritime activity” — a signal that Havana may look favorably on Carnival’s proposal and U.S. cruise ships in general.

Carnival hopes to begin the trips in May and says it would be the first American cruise company to visit Cuba since the advent of the embargo, which went into full effect in 1962.

Cruise ships dock regularly in the port of Havana during the winter high season, disgorging hundreds of travelers at a time into the adjacent colonial quarter.

The Transportation Ministry also cited Cienfuegos, Santiago and other coastal points as centers of cruise tourism, and highlighted the Isle of Youth as an opportunity for possible future expansion of the sector.

American tourism to Cuba remains illegal under U.S. law, although Washington has relaxed rules in recent years to allow ever-greater numbers of U.S. visitors on cultural, academic, religious and other types of exchanges considered “purposeful travel.”

Carnival’s weeklong cruises aboard the 710 passenger-capacity Adonia would offer legal “people-to-people” trips in which travelers spend most of the day involved in cultural activities in order to conform to U.S. regulations.

Most Cuban ports are not able to accommodate larger vessels that can hold tens of thousands of people. In Havana, an automobile tunnel that traverses the mouth of the bay prevents the city from dredging deeper to receive lower-drafting ships.

A recently completed upgrade at Mariel, an industrial port about a 45-minute drive west of Havana, could be a possibility if Cuba ever looks to receive the bigger cruise vessels.