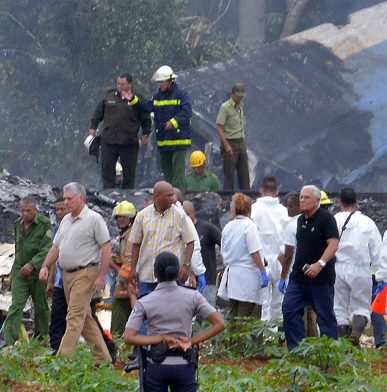 HAVANA, Aug. 19th  – Three months after the worst airplane disaster on the island in the last 30 years, the Cuban government still hasn’t officially announced what caused the crash of Flight DMJ-972 of Cubana de Aviacion, in which 112 of the 113 people aboard were killed.

Investigations by the Cuban governmental commission have not turned up anything new since a month ago it dismissed as “speculations” the statement by the Mexican company Global Air, owner of the aircraft, attributing the crash to “human failure” on the part of the pilots.

Led by specialists of the Civil Aviation Institute of Cuba (IACC), the group of Cuban, US, Mexican and European experts stated at the time that “a process (of investigation) of this magnitude requires the analysis of multiple factors and has not yet been concluded.”

A definitive explanation is expected to be found by the inspection of the airplane’s two black boxes, which were sent to the United States for analysis by specialists of the Boeing Company, manufacturer of the aircraft.

The only survivor of the disaster, 19-year-old Cuban Maylen Diaz Almaguer, continues to be in “critical” condition in Havana’s Calixto Garcia Hospital, despite having begun to show a certain improvement, according to the latest medical report issued last June.

Last May 18 a Boeing 737-200 leased by Cubana de Aviacion from Global Air crashed minutes after takeoff from Havana Airport on its way to Holguin some 700 kilometers (435 miles) to the east, which shocked the whole country, unaccustomed as it is to such tragedies.

The accident left 112 people dead, of whom 101 were Cubans and 11 were foreigners: seven Mexicans including the six crew members, two Argentines and two from the Western Sahara living on the island, one of whom also had Spanish nationality.

A former pilot and a chief flight attendant of the company told several media including EFE that the crash had to happen sometime due to the “absolutely unsafe conditions” in which the company flew its planes.

Almost immediately after the accident, the company was suspended by Mexican authorities for an exhaustive investigation.