HAVANA, Sept. 5 (EFE) Spain wants to “facilitate to the maximum” relations between Cuba and the United States, the speaker of the lower house of Spain’s parliament, Jesus Posada, said Saturday in Havana, adding that his country will “do all it can” to smooth the path to normalization between the two countries.

After hailing the renewal of diplomatic ties between Havana and Washington as “a great accomplishment,” Posada recalled that after so many years of embargo and confrontation, “we can’t expect that everything will be all fixed up in a matter of weeks or months,” but considered that “there is a positive path ahead that will open bit by bit.”

“Spain as a member of the European Union will do all it can to make that happen,” the lower house speaker said.

He recalled that his country has stood by Cuba through “difficult times,” while other European Union countries “were perhaps not so close to Cuba as we were.”

Asked about the expectations sparked by the next round of talks between Cuba and the European Union, to be held next week in Havana, Spain’s lower house speaker expressed his confidence that it will be successful and that Spain is being “very active” in making it so.

The visit to Cuba has been “a success,” according to Posada, who insisted on its parliamentary and multi-party character, accompanied as he was by Ignacio Gil of the Popular Party, Teresa Cunillera of the Socialist Party, and Jose Luis Centella, spokesman for the leftist Izquierda Plural coalition and secretary general of the Communist Party.

Attending the meeting of the Spanish parliamentary delegation and Cuban lawmakers on Saturday were Posada, Gil, Cunillera, Centella and Ambassador Francisco Montalban on the Spanish side, while for Cuba there were parliament speaker Esteban Lazo, the head of the International Relations Commission, Yolanda Ferrer, and the leader of the Constitutional and Judicial Affairs Commission, Jose Luis Toledo Santander.

The Spanish parliamentarians return to their country Saturday night after a three-day visit, during which the met with Cuban Foreign Minister Bruno Rodriguez, the Association of Spanish Entrepreneurs in Cuba, or AEEC, and with representatives of Spanish communities in the Caribbean nation. 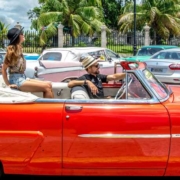