HAVANA, May 18th   Almost 300 Spaniards who were stranded in Cuba, part of the tourists, return this Sunday on what could be the last flight from Havana to Madrid until air transport normalized by the coronavirus pandemic.

The plane, an Iberia Airbus A330-200 chartered by the Spanish Foreign Ministry, is due to depart this afternoon and will land in Madrid on Monday morning.

The aircraft will be filled with 288 passengers on board, of which slightly less than half are Spanish with a tourist visa or for some temporary activity in Cuba and the rest are citizens with dual Cuban and Spanish nationality.

“It is about helping tourists who have found themselves in an extreme situation of not being able to return to the country when the airspace has closed,” the Spanish ambassador to Havana, Juan Fernández Trigo, told Efe. to the José Martí Airport in the Cuban capital to accompany travellers on their departure.

Cuba closed its borders on April 2 due to the coronavirus crisis, which until today leaves 1,872 confirmed cases and 79 deaths on the island, although some flights continue to operate on a timely basis, mainly aimed at this type of repatriation.

In the case of the Spaniards stranded in Cuba, many of them had asked the authorities of their country to facilitate their return home, so the Foreign Ministry decided to charter this plane.

“It is a flight to which the Spanish contribute, which is subsidized by the State and therefore the prices are very adjusted to the situation and the circumstance,” explained the ambassador, after assuring that all the requests for return made up to 6 have been satisfied. May, the day this flight was confirmed.

Although more requests came later and not all could be met, the Spanish authorities tried to accommodate the travellers “on a first-come, first-served basis and taking into account the needs and circumstances of the people,” he said.

One of them, from Lanzarote, Rigoberto Reyes, explained to Efe that he planned to return home on March 31, but his flight was cancelled and until now he remained stranded in Cuba with his wife and son.

“I have been almost three months without working, I have spent vacations, licenses and everything there has been and for having,” said Reyes, who works as a doctor in Arrecife.

Another Spanish tourist, Toni Miró, 25, lived in a similar situation.

“When we wanted to return they cancelled all our flights, so we stayed in Cuba. They directed us to a hotel with more foreigners and we have been there waiting until this flight has left,” Miró said.

According to the figures of the Embassy and Consulate, from March 24 and until the closing of the borders some 2,000 Spaniards had left Cuba.

It is estimated that there are still some with a tourist visa (the Cuban authorities counted 900 at the end of March), although it would be mostly people who stay long periods on the island. 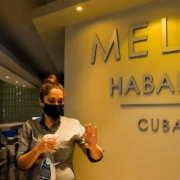 Cuba is preparing to reopen airports