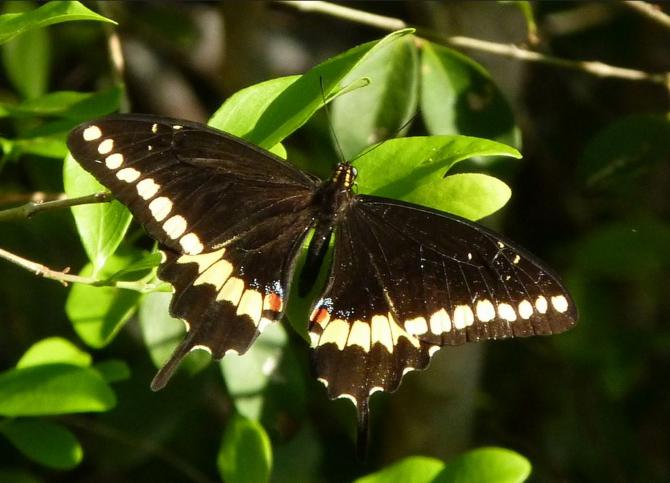 A naturalist searching for endangered Schaus’ swallowtails in Key Largo discovered something much more rare: a battered but conspicuously alive Poey’s swallowtail, a Cuban butterfly never before seen in the U.S. The butterfly is hard to find even on its home turf, so the sighting along a trail in John Pennekamp Coral Reef State Park counts as a major get.

“I didn’t sleep last night I was so excited about it,” Susan Kolterman said after discovering the butterfly Monday.

Kolterman first spied the mostly brown swallowtail slurping nectar on a wild coffee plant as she and another volunteer walked down the Grove Trail, a well-known path for butterflying due to its mix of plants. The butterfly caught Kolterman’s attention because it was uncharacteristically still for a swallowtail.

“They don’t stop for any man,” said Kolterman, a volunteer at the nearby Dagny Johnson Key Largo Hammock Botanical State Park.

She snapped two pictures and hurried home ahead of bad weather. Since April, Kolterman had been on the lookout for Schaus’ swallowtails, an endangered butterfly that she helps survey. Once abundant throughout the Keys, Schaus’ have nearly vanished — decimated by habitat loss and mosquito spraying — and now draw butterfly watchers from around the country when they begin to emerge in April. Kolterman, “the one who doesn’t mind the horrendous mosquitoes and living summer hell,” has been counting and monitoring Schaus’ for the last six years.

May also marks the beginning of a national butterfly count that in Florida has increasingly documented a dwindling number of butterflies. With about two dozen species in trouble — among the highest in the U.S. — Florida counts have been on the decline. But Kolterman was having a particularly good day. On Monday she’d counted 24 species, 10 more than her best day ever that included white checkered skippers, sleepy oranges and a rare mimosa yellow.

She had no idea how good her day was about to get.

After blowing up a picture of the swallowtail and failing to find a match in any of her books or online, Kolterman called Roger Hammer, a wildflower expert and fellow butterfly guy. Hammer said Kolterman’s description — big brown wings with a single chain of distinctive yellow spots and a dash of orange on its tail — didn’t sound quite right, so he told her to send a picture.

Hammer suspected the swallowtail was from the West Indies, dug out a rare, out-of-print book by an Oxford lepidopterist and quickly matched it to an image of a Poey. Since none had ever appeared in the U.S., Hammer forwarded the image to experts up and down the East Coast.

Kolterman also started sending out requests, eventually getting confirmation from John Calhoun, a researcher at the University of Florida’s McGuire Center for Lepidoptera and Biodiversity.

How the lonely traveler wound up in the Keys remains a mystery.

Butterfly expert Marc Minno, who has been studying swallowtails in Cuba, said it’s not uncommon for butterflies to travel back and forth between Florida and the island, and throughout the Caribbean.

Large swallowtails can easily travel up to 100 miles in a day, he said. Hurricanes and big storms that have famously blown birds far from home can also deposit butterflies on faraway shores. Some of Florida’s rarest butterflies — the Miami blue, Bartram’s hairstreak and Florida leafwing — are subspecies of Cuban butterflies, he said.

This spring brought out an unusual number of butterflies, including this Florida purplewing.
Susan Kolterman

“They’re in the Bahamas, in Hispaniola, Jamaica and Cuba and the only way those tiny little butterflies could get there is by flying across water,” Minno said.

Researchers don’t know why the butterfly is so rare in Cuba, he said. The Poey belongs to a family of butterflies that feed on citrus plants, but the Poey uses plants in the poinsettia family as a host, which Minno finds unusual and suspects it may be wrong. The Poey may also require some other specific mix of habitat that scientists haven’t quite figured out, he said.

Because its tail was broken, Minno suspects Kolterman’s butterfly has been around for a while, and will likely only live a few more weeks. But if it can find a poinsettia, and there are plenty in the Keys, it’s possible the lonely explorer could be the beginning of a new colony.

“We’ll be watching for that,” he said.

In the meantime, weary Schaus’ hunters at least have something else to celebrate.

“It’s nice to be positive about something,” Minno said. “This is going to be the big news story for months to come for my people.” 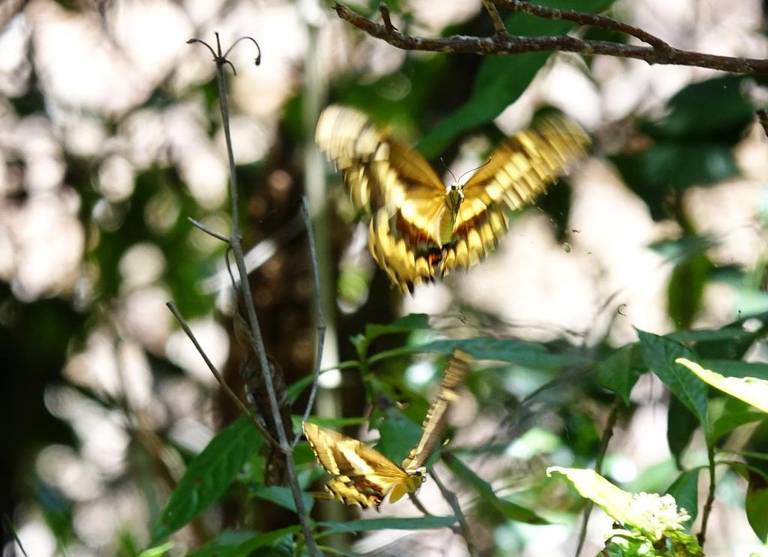 Icíar Bollaín prepares a movie inspired by the autobiography of Carlos Ac...
Scroll to top