HAVANA, Apr. 10th  (Reuters)   A striking image is circulating this week on social media in Cuba: a dissident pumping his fist in the air, handcuffs dangling from one wrist,

after friends and neighbors helped him evade arrest by police in Havana. 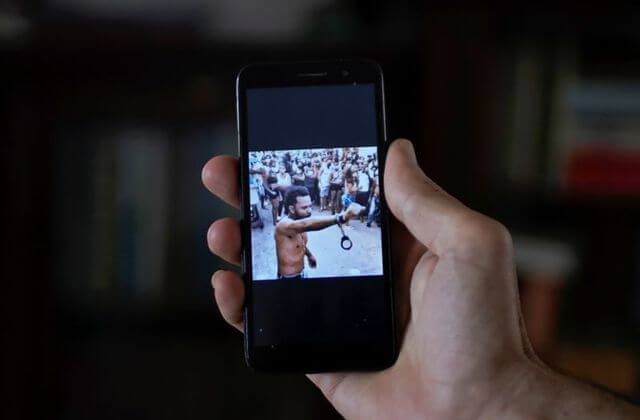 A man who did not want to be identified shows on his mobile phone an image displayed in social media of the rapper Maykel Osorbo with handcuffs clamped around one wrist, in Havana, Cuba, April 6, 2021. REUTERS/Alexandre Meneghini

The image is a screenshot from a video showing rapper Maykel Castillo celebrating his escape, surrounded by other dissidents and residents of Havana’s rundown San Isidro neighborhood on Sunday. Some join him singing an anti-government song and insulting President Miguel Diaz-Canel.

Castillo told Reuters by phone from his home that the arrest attempt was another in a string of arbitrary detentions to intimidate him and others in the dissident artists collective, the Havana-based San Isidro Movement (MSI).

Asked about Sunday’s incident, the Foreign Ministry’s International Press Center, which fields all requests from foreign journalists for comment from state entities, told Reuters that there would be no comment.

State media such as ruling Communist Party newspaper Granma have in the past five months called Castillo and the MSI part of a U.S.-directed “soft coup” attempt, charges they deny. The government generally denounces dissidents as members of tiny groups paid by the United States to stir up unrest and further its decades-old efforts to overthrow the government.

To those who want the end of the one-party state, Castillo, 37 and also known by his stage name Maykel Osorbo, is a hero. To others he is a social misfit.

The image circulated on social media shows how while public dissent in Cuba is still uncommon, it is becoming less so. This is partly due to access to mobile internet and because frustrations with the government are growing amid the island’s worst economic crisis in decades, half a dozen analysts and Western diplomats interviewed by Reuters said.

Tough U.S. sanctions and the pandemic, which have gutted tourism, have cut into foreign exchange earnings and battered the largely state-run economy, which contracted 11% in 2020. There have been increased shortages of basics like medicine and food.

The MSI has staged provocative performances and exhibitions documented online since it was created three years ago, first largely about censorship but now also on daily hardships.

The “artivist” movement has expanded organized public dissent beyond traditional political activism, attracting support from sectors of the broader artistic community and some ordinary citizens. There are no independent opinion polls so it is not possible to say how wide this support is.

Speaking at the MSI headquarters, a dilapidated 1920s building, one of its main organizers, Luis Manuel Otero Alcantara, 33, told Reuters that 80-90% of its funding came directly from the artists themselves, through artwork sales or crowdfunding.

The MSI’s latest performance, which included handing out candies to children, aimed to underscore the fact families in poor neighborhoods like theirs could no longer even afford sweets due to state economic mismanagement, he said.

Otero Alcantara said the fact ordinary citizens sided with the MSI against the police and joined in a protest on Sunday showed they were beginning to overcome their fear of authority and the consequences of speaking up, he said.

“This neighborhood is an example of what is happening across Cuba, not just here,” Otero Alcantara said. “It’s just that as artists, we are more visible.”

Small protests – whether over censorship, red tape deemed excessive or animal rights – have popped up nationwide in recent years.

Analysts say the launch of the mobile internet in 2018 was a gamechanger because it allowed Cubans to get information outside traditional state-controlled mass media, and mobilize.

“This allows one person’s or one community’s frustration and dissent to spread in real-time so that others who harbor similar frustrations will also learn that they are not alone and lose their fear of speaking out,” said Ted Henken at Baruch College in New York, author of “Cuba’s Digital Revolution”.

The anti-government song “Patria y Vida” (“Homeland and Life”) that San Isidro residents intoned on Sunday was a hit released in February by some of Cuba’s most popular contemporary musicians who now live in Miami, like reggaeton duo Gente de Zona. The song also featured Castillo and another dissident rapper on the island.

Dissident group the Patriotic Union of Cuba, headquartered in the eastern city of Santiago de Cuba, says dozens of its activists have been on hunger strike for three weeks, protesting what it says is state harassment that has prevented them from delivering food and medicines to needy residents. The group is posting pictures on social media of the hunger strikers.

Reuters was unable to independently verify the strike.

State media have dismissed it as a “show”.

On Thursday, Julie Chung, the U.S. State Department’s acting assistant secretary for Western Hemisphere Affairs, said on Twitter Washington was alarmed by the “worsening situation” regarding the hunger strike.

The Cuban government has addressed some specific issues raised by dissidents, for example announcing in February it was introducing a decree on animal rights.

It has attacked critics who want a complete political overhaul, like the MSI and the independent journalists covering public dissent. State television has dedicated hours of prime time in recent months to dismissing them as the “new actors of the old playbook” – a U.S. soft coup attempt.

The U.S. State Department declined to directly address a Reuters’ question about Havana’s view that Washington and U.S. groups finance dissidents in a bid to destabilize it.

“We support those in civil society, in Cuba and around the world, who are defending their rights or struggling for freedom,” a State Department spokesperson said.

Some activists and independent journalists have publicly stated that they are not directed by the United States, though they acknowledge that they receive foreign grants including from U.S. organizations like the National Endowment for Democracy, funded largely by the U.S. Congress.

Dissidents like the MSI members have documented on social media repeated house arrests and other types of harassment. At least 10 prominent journalists for non-state media have left Cuba in recent years after complaining of state pressure, according to an informal count by Reuters.

Still, some dissidents told Reuters they are undeterred.

“As much as they try to discredit the work we are doing, it doesn’t work,” Castillo said. “I am not anyone’s agent. I am a free citizen. I have family in the United States and friends and supporters that help me, and my artwork.”

Varadero will host the World Cocktail Championship
Scroll to top