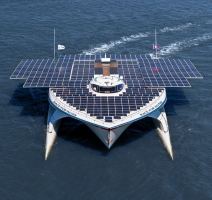 HAVANA, July 25th The Race for Water vessel and her crew made landfall in Havana on Thursday 20 July for an 18-day Cuban stopover.

Having set sail on 7 July from Caroline Bay Marina in Bermuda, the mixed solar-hydrogen-kite-powered vessel took 13 days at an average speed of 3.5 knots to cover the 1,300 nautical miles separating Bermuda and Cuba. Thirteen days of sailing disrupted by a series of overly frequent encounters with plastic waste floating on the surface of the water according to the crew.

All too aware of this growing plastic pollution, the Race for Water Foundation is now on Crocodile Island to inform, raise awareness and act on this scourge by getting involved with the local Waste Management protagonists and the young generations. Upon their arrival, it was one of the very first steps taken by the crew of the Race for Water vessel following customs formalities: depositing the plastic waste collected on their journey to Cuba in the dustbins of Havana’s Terminal Sierra, where the vessel is moored.

And yet gathering up plastic debris at sea is not the vessel’s primary mission, nor is it the direct objective of the 2017-2021 Odyssey. Understandably though, it was impossible for the crew to come across a heap of plastic without attempting a man overboard manœuvre to collect it. According to Annelore Le Duff (second captain) the crew “came across such debris one day in three.

It was partially damaged initially, in the Sargasso Sea, then intact as we approached the Cuban coast, where there were massive concentrations in the zones with strong current. Bottles, packaging and plastic bags… quite a selection! It left us with the sad impression that the sea was becoming an open-air dumping ground. Aboard Race for Water, we’re all sailors and we relish sharing the Race for Water Foundation’s messages regarding the preservation of the oceans. We’re particularly aware of this kind of pollution, but that doesn’t stop us from feeling just as saddened to witness its presence.”

This pollution is something that concerns all the people encountered since the start of the Odyssey, and this is further evidenced in Cuba. Indeed, just 24 hours after its arrival in Havana, the Race for Water Foundation, accompanied by the Swiss Embassy in Cuba, welcomed aboard the boat around fifty Cuban officials, ambassadors from France, Panama, Belgium, Argentina, Holland, Germany and Italy, as well as the local and international press, to discuss this issue.

Powered by renewable energy, the Race for Water Foundation vessel is the perfect place to gather together, inform and share one another’s experiences and solutions in terms of the preservation of the oceans.

The discussions really found an echo during the 2-hour visit aboard the vessel and this is set to continue throughout the Cuban stopover with a series of visits from schoolchildren and students, a “Plastic Waste to Energy” workshop, as well as a science mission on microplastics jointly carried out by our partners JPI Ocean and a Cuban crew from the CEAC electricity cooperative.

It’s a mission, which will take the Race for Water vessel to the north of the island for a series of sampling, to the great delight of the crew, who are hoping for the same sailing conditions as those encountered on their journey to Cuba, as Annelore explains.

“Throughout the trip, we enjoyed perfect conditions for the vessel. The sunshine and light breeze enabled us to properly recharge our batteries and fly the kitewing several times so we could benefit from air conditioning aboard. An energy-guzzling, but much appreciated luxury at these latitudes!”