The heir to the throne and his wife Camilla, the Duchess of Cornwall, will make a four-day visit to Cuba during a wider tour of the Caribbean, his Clarence House official residence said.

The tour ends on March 29 — the scheduled date of Britain’s departure from the European Union.

There are no plans to meet Raul Castro, the brother of late former Communist ruler Fidel Castro, though the royals may meet members of the Buena Vista Social Club musical ensemble.

The March 24 to 27 Cuba trip, at the request of the British government, will “highlight the growing bilateral relationship with the UK and showcase some of the cultural links between the two countries”, Clarence House said.

Britain’s head of state Queen Elizabeth, now 92, has not made an overseas visit since 2015, meaning Charles and Camilla now do much of the heavy lifting work of foreign tours.

The whole tour, from March 17, will see them undertake more than 50 engagements across 10 islands, including Cuba.

The royal couple will also tour St Lucia, Barbados, St Vincent and The Grenadines, St Kitts and Nevis and Grenada to celebrate the monarchy’s relationship with those realms.

They are five of the 16 separate countries where Queen Elizabeth is the head of state.

The visit will finish in the British overseas territory of the Cayman Islands.

The royals’ Cuba trip will see them tour Havana and the south coast.

The visit will see the couple meet a group of owners of British classic cars and visit a music studio where a meeting with Buena Vista Social Club members is being finalised.

“The prince and the duchess’ visit will highlight cultural and academic connections, links between the people of the UK and Cuba, and explore key themes, such as the arts, youth entrepreneurship, heritage restoration and sustainable agriculture,” said Clarence House.

They will be guests of honour at an official dinner hosted by President Miguel Diaz-Canel, who succeeded Raul Castro in April last year.

Earlier this month, Camilla confirmed she would be travelling to Cuba but confessed she “wasn’t so sure” about the food.

Scott Furssedonn-Wood, the royal couple’s deputy private secretary, said they were both “looking forward to all sorts of things in Cuba”.

“The music, the dance, and food is certainly one of those things. I’m sure they’re looking forward to sampling the local produce,” he said.

The Cuban foreign ministry greeted the announcement on social media.

“You will be welcome to our country,” it said on Twitter.

A British Foreign Office spokesman said: “This is part of our long-standing approach towards Cuba of engagement and open and frank dialogue over the issues that divide us like human rights, but also engagement towards progress on the matters that we’re interested in.”

They will visit Havana and the south coast 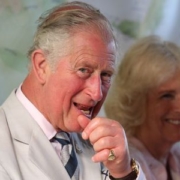 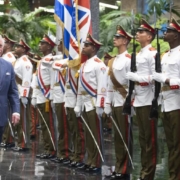