HAVANA, Sept. 21 (AP) Pope Francis met with Fidel Castro today after urging thousands of Cubans to serve one another and not an ideology during a Mass celebrated in Havana’s iconic Revolution Plaza. The Vatican described the 40-minute meeting at Castro’s residence as informal.

Francis is hailing detente between the United States and Cuba as a model of reconciliation. He urges Presidents Barack Obama and Castro to continue working to build normal ties as the pontiff begins a 10-day tour of the former Cold War foes.

Francis served as mediator for the resumption of diplomatic relations this year. He says, “I urge political leaders to persevere on this path and to develop all its potentialities.”

Francis calls the negotiations that led to the reopening of embassies in Havana and Washington “an example of reconciliation for the entire world.”

Bells rang out and a few hundred excited and sweaty priests and sisters clapped and shouted “Francisco!” as the pope arrived. An organ broke into a celebratory hymn.

The cathedral was first started by priests of Francis’ Jesuit order and the facade was designed by the Italian architect Borromini. It boasts a large bronze statue of St. John Paul II, who became the first pope to visit Cuba in 1998, as well as a replica of the Virgin of Charity of Cobre, Cuba’s patron saint. 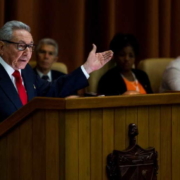