HAVANA, April 18 (AFP)  The French spirit giant Pernod Ricard and the Spanish hotel chain Iberostar were sued in United States courts for operating with goods nationalized by the Cuban revolution, according to copies of the complaints obtained by AFP this Friday.

Pernod Ricard, number two in spirits worldwide, has been present in the country for more than 20 years, where it operates a joint venture with Cuba Ron S.A., destined to the production of Havana Club, the most famous of Cuban rums.

The lawsuit against the French company was filed by the daughter of the founder of Coñac Cueto, a company confiscated in 1963 by the Cuban government and integrated into the Havana Club beverage line, according to the plaintiff.

Iberostar, which operates about twenty hotels in Cuba, is sued by a descendant of the owner of a building in Santiago de Cuba (southeast), confiscated in 1961 by the government, according to the complaint. A hotel of the Spanish group now occupies that property.

Already processed under this law, Iberostar has publicly announced that the lawsuits in no way prejudice its plans to open new establishments on the island.

Information on the two lawsuits was alerted to AFP by the US-Cuba Economic and Commercial Council, which has identified a total of 23 complaints filed in recent months, under Title III of the US Helms-Burton law, promulgated in nineteen ninety-six.

Several major groups, including Accor, Amazon, Carnival and American Airlines, have already been prosecuted, but some of these lawsuits were dismissed by the US courts, in particular, because some of the complainants were unable to prove that their family-owned the object of the complaint at the time of the Cuban revolution.

Title III of the Helms-Burton Act, the application of which had been suspended by successive US presidents, entered into force in May under the administration of Donald Trump, which has tightened the embargo against the island, in force since 1962.

That rule allows anyone or business doing business with nationalized assets to be prosecuted in US courts during the 1959 revolution, a misleading definition that threatens the island’s foreign partners.

The Cuban government considers the Helms-Burton law to be inapplicable due to its extraterritorial nature, an opinion shared by the European Union, which claims to have a legal arsenal to counter that legislation. 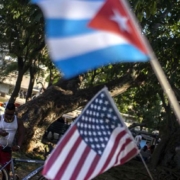