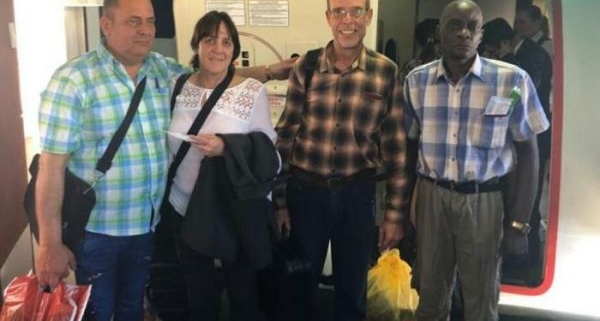 HAVANA, Nov.19th With the arrival in the early hours of Monday of 207 Cuban health workers who were in Bolivia, there are now 431 professionals who have come back to the island.

Among those returning were Amparo García, Idalberto Delgado, Ramón Emilio Álvarez, and Alexander Torres, who had been arbitrarily and unjustly detained last November 13 in El Alto.

On hand at the Jose Marti International Airport  to welcome the returnees were Roberto Morales Ojeda, vice-president of the Council of Ministers, and José Ángel Portal Miranda, minister of Public Health, among other authorities,

“We return victorious,” said Dr. Nirza García Valdés, a specialist in general surgery, on behalf of the collaborators, while the Public Health minister assured that “Cuba will continue offering its experiences and its solidarity.”

Cuban medical collaboration in Bolivia began in 1985, and as a result, 17,684 health professionals have made their contribution to that country. At the moment of the coup against President Evo Morales, some 700 Cuban health workers were deployed in the South American nation.