HAVANA, Nov. 16th The Fund of the Organization of Petroleum Exporting Countries has invested more than 158 million dollars in support of Cuba’s hydraulic infrastructure, with projects that, according to official data, have an incidence on the lives of more than 3 million people on the island.

The government of Cuba and the Organization of Petroleum Exporting Countries (OPEC) Fund for International Development (OFID) signed this Wednesday in Havana a loan agreement for the financing of a 25-million-dollar hydraulic project, which will benefit municipalities to the west of the Cuban capital.

The agreement, signed by the president of Cuba’s National Institute of Hydraulic Resources (INRH), Antonio Rodríguez, and OFID Director-General Abdulhamid Alkhalifa, will favor the sanitation and drainage works in La Lisa, Playa, and Marianao.

The OPEC Fund has invested more than 158 million dollars in support of Cuba’s hydraulic infrastructure, with projects that have an incidence on the lives of more than 3 million people on the island, according to official data. 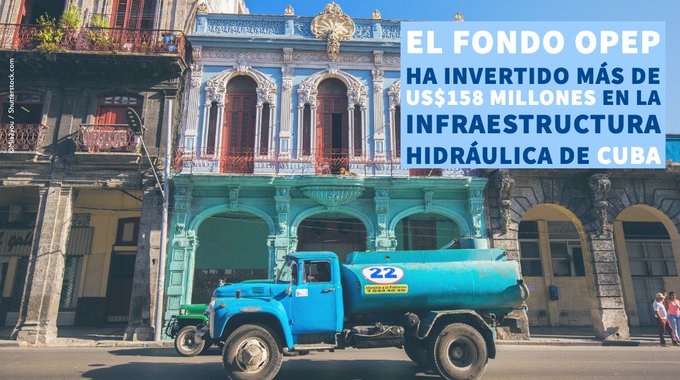 The new loan granted for the project has a grace period of five years and minimum interest, according to the president of the INRH, cited by the Agencia Cubana de Noticias news agency.

Rodríguez stressed that the signed agreement will have a “great impact” on the municipalities of western Havana because thanks to it more than 600 infiltration wells will be eliminated, which will improve the sewer system.

During the meeting, the OPEC representative said that Cuba is one of the countries that best implements the agreed projects, so the organization is encouraged to continue carrying out works on the island.

Last January, Cuban Vice President Ricardo Cabrisas and Abdulhamid Alkhalifa signed an agreement in Vienna for the granting of a soft loan for 25 million dollars for a sanitation and water supply project in the province of Las Tunas.

In addition to the hydraulic sector, in past Cuba has benefited from OFID loans to contribute to the modernization and diversification of the Cuban energy matrix, with an impact on the increase of the installed capacity of renewable energy sources, such as solar.

Alkhalifa traveled to Cuba on an official visit for the celebrations of the 500th anniversary of the foundation of Havana and has planned meetings with Cuban ministers and tours through the areas where projects are being carried out with OPEC funding.