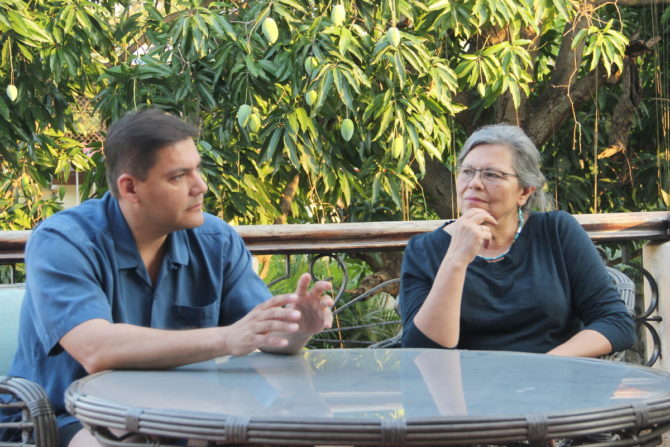 Chief Eric Thompson and Chief Beverly Cook, of the St. Regis Mohawk Tribe, after meeting with Cuban biotech company that developed Heberprot-P. “Accessing this treatment requires an act of political will,” said Chief Thompson. “We would be derelict in our duties if we didn’t research how to access this medicine. We need to do this.” said Chief Cook. Photo courtesy St. Regis Mohawk Tribe

HAVANA, May 17th According to federal data, 17 percent of Native Americans living in the United States have diabetes. That’s more than double the rate of the white population. On the Akwesasne Mohawk reservation near Massena, half of the people over 65 have diabetes.

The St. Regis Mohawk Tribe has taken an unusual step to try to deal with the disease. Last month, Mohawk chiefs led a delegation to Cuba where doctors have pioneered a new way to treat a very dangerous symptom of diabetes.

People with diabetes can get foot ulcers. They’re painful sores, and when they go untreated, they get so bad, toes or the whole foot have to be amputated. Chief Beverly Cook of the St. Regis Mohawk Tribe said that can devastate diabetics and their families, causing “loss of productivity in the community, and just personal shock and trauma.”

The tribe already has a diabetes wound care unit in Akwesasne. But the chiefs heard about a new treatment for the ulcers developed by scientists in Cuba, called Heberprot-P. So they led a delegation to Havana to learn more. Cook was impressed by what she saw. “This treatment definitely would help. We saw evidence of severe grade 4 and 5 diabetic foot ulcers that were healed within 45 days,” she said.

Cook hopes the visit will put pressure on the federal government to approve the medicine and provide funding for tribes to buy it. She said, “We don’t want Indian people to be left in the dark about it and to be not able to access it due to the budget constraints of Indian health service,”

This connection between Mohawks and Cubans might seem strange, but Chief Eric Thompson said there is an interesting chapter of history in the relationship. An Iroquois delegation, led by “a Tuscaroran individual by the name of Mad Bear Anderson,” said Thompson, traveled to Havana just after Fidel Castro’s Cuban revolution to recognize the new government.

“The Cuban officials asked at that time what they could do for our people. They were told that we would be in need of their assistance on an international level with regards to recognition.”

According to Thompson, that visit laid early groundwork for Cuba to become a supporter of the United Nations Declaration on the Rights of Indigenous Peoples, which was ratified in 2007.

Chief Cook said native tribes can identify with people in Cuba, that their efforts to survive and innovate in the face of the U.S. embargo is similar to what native people have endured. “I think it’s very enlightening, in light of all of that hardship, that they are that resilient and quite brilliant,” she said.