HAVANA, June 28th  Attired in their dress blues, Mike East and two other Marine guards at the United States Embassy in Havana carried out a melancholy mission in the winter of 1961.The Marines lowered the flag flying at the Embassy while the last remaining members of the American diplomatic corps there were preparing to leave Cuba, a day after the United States severed diplomatic relations with Fidel Castro’s government.

Mike East, one of the guards who took down the flag on Jan. 4, 1961, died of lung cancer on Wednesday in Memphis, his son Stanley said. He was 81. But Mr. East had lived long enough to join with his fellow Marine veterans from so long ago in realizing their dream of returning to Havana for the hoisting of another American flag.

On Aug. 14, 2015, Mr. East, along with Jim Tracy and Larry Morris, whom he had kept in touch with over the years, joined Secretary of State John Kerry at a ceremony marking the restoration of diplomatic relations with Cuba, sought by President Barack Obama and formalized on July 20.

Mr. Tracy, who had been the senior-ranking Marine of the three guards, handed a folded American flag to an active-duty Marine. He hoisted it at the same building where, 54 years earlier, the three Marines had burned sensitive documents, made their way through hundreds of Cubans lining up for a last-minute chance to obtain visas to enter the United States, and then took down the last flag to have flown over the Embassy before departing Cuba by boat.

The Embassy building had been used by Swiss officials attending to American interests in Cuba since 1961. Now it was the American Embassy once more.

“He was ecstatic, it brought back a lot of memories,” Stanley East said, recalling his father’s emotions at the flag-raising.

The day after that ceremony, David N. Arizmendi, a State Department communications official, toured Havana with the three veterans.

“What made this a powerful moment was the humanity of it,” Mr. Arizmendi, now the press attaché at the American Embassy in Buenos Aires, recalled Saturday. “They represented the human aspect of bilateral relations the way documents don’t. They were kids when they left and they came back as old men.”

Mr. East had been a guard at the Embassy for nearly two years and had grown to love Cuba. “You thought about the good times, the people you met, the friendships,” he said in a State Department video a few days before the 2015 flag-raising. But his fond memories extended beyond that.

Mr. East had been one of only two African-Americans in his training class for Embassy guards at Parris Island, S.C., in 1959.

Mr. Arizmendi said that Mr. East, who was born and raised in Mobile, Ala., told him “how shocked he was in Cuba at what he perceived to be racial equality and how different it was from what he had seen growing up in the Deep South.”

Francis Woodie East, known as Mike, was born on Oct. 8, 1938, one of five children of Jacob and Sally (Robbins) East. He enlisted in the Marines out of high school, served two tours in the Vietnam War as a motor transport maintenance chief and was later a Marine recruiter. 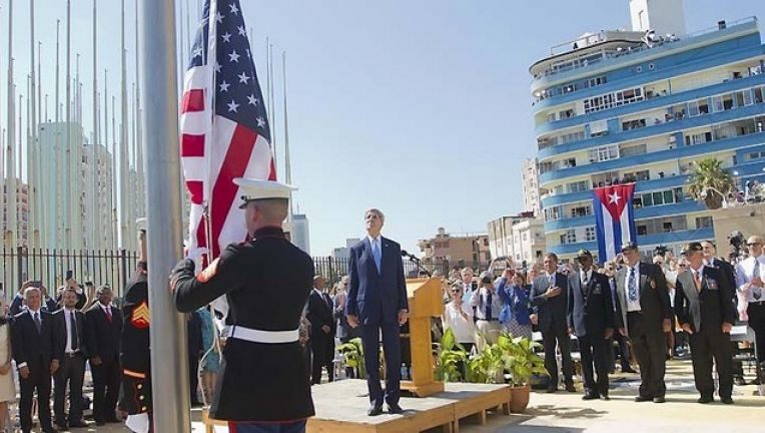 He retired from the military as a gunnery sergeant after 22 years of service and later worked as a letter carrier in Memphis, where family members had settled in the early 1970s.

In addition to his son Stanley, Mr. East is survived by his wife, Alice (Harris) East, a nurse and schoolteacher; his son Michael; a sister, Dora Miller; a brother, Alphonse; three grandchildren; and a great-grandson.

Jim Tracy, a combat veteran of the Vietnam War, spent 30 years in the Marine Corps, retired as a master gunnery sergeant and now lives in Alabama. Asked Sunday whether he had thought that he and the other two Marine guards might one day be hoisting a flag again in Cuba, he replied, “We said it when we took it down.”

The third Marine guard, Larry Morris, worked as a machinist after his Marine discharge as a corporal and lives in West Virginia.

In September 2015, Congressman Steve Cohen, who represents the district where Mr. East lived in his later years, presented him with the American flag that flew over the Capitol on the day of the flag-raising.

In his speech at the Havana ceremony, Secretary Kerry said: “Fifty-four years ago, you gentlemen promised to return to Havana and hoist the flag over the United States Embassy that you lowered on that January day long ago. Today, I invite you on behalf of President Obama and the American people to fulfil that pledge by presenting the Stars and Stripes to be raised by members of our current military detachment.

“Larry, Jim and Mike, this is your cue to deliver on words that would make any diplomat proud, just as they would any member of the United States Marine Corps: ‘Promise made, promise kept.’ Thank you.”