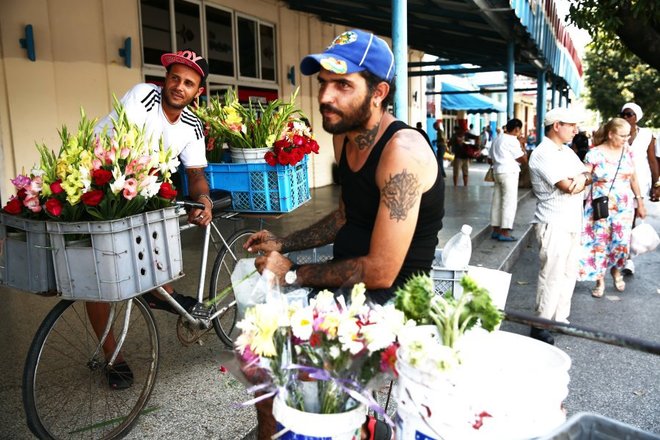 HAVANA,march 28th   A week after President Barack Obama visited his country, Roberto Hernandez sits with friends drinking a beer now that life is back to normal here.

It was quite a week. Obama toured Old Havana with his family and met with Cuba leader Raul Castro. There also was a Major League Baseball game Tuesday with the Tampa Bay Rays and The Rolling Stones concert on Friday.

But things are quieter now as Hernandez visits at a cafe with friends, Juan Dominguez and Maritza Perez. The three relaxed, reflecting on Obama’s historic visit.

Hernandez, a 52-year-old shoemaker, made a point of staying home last week to watch Obama’s visit on television. “I was interested in what he was going to say,” Hernandez said. “I wanted to listen to it in his own voice, what he wants to do.”

At an unprecedented news conference with Castro, Obama said the U.S. still has differences with Cuba in several areas, like freedom of expression, assembly and religion. And he said only Cubans can chart their future.

“He spoke well,” Hernandez said. “It’s true that the future of Cuba has to be determined by all the Cubans.”

A few feet away, holding their bikes filled with boxes of flowers in a busy street near the Colon cemetery, Michael Cardoso, 37, and Yusniel Tabares, 32, said they didn’t watch the news conference or Obama’s speech. They, like many Cubans, were working. But they have heard what he said.

“What he has to do is to take us to the U.S.,” Tabares said, half joking. Tabares said he has heard Obama talking about ways the U.S. can help the Cuban people. Asked if the thinks those promises will be fulfilled, Tabares said, “Let’s see.”

Cardoso said he has heard people comment about Castro’s brash response during the news conference with Obama that there aren’t political prisoners in Cuba. “What happens is that freedom of expression is tighter here than in other places,” Cardoso said. And he likes that Obama mentioned the issue. “I think it’s good that he mentioned it,” he said. “It’s true.”

Cardoza said he hopes for economic opportunities in Cuba, so he liked hearing Obama promote American businesses that will come to the island. Cardoza said the embargo is not to blame for all of Cuba’s economic problems. Supplies from the U.S., he says, are bought through third countries, although at a higher price. But there are also Cuba products that are unaffordable.

“And I am middle class, I have a business,” he said. “Those who live out of retirement can’t do anything.” Many Cubans received Obama warmly, giving him high marks for his visit and the efforts he’s making to improve relations with the country. Dominguez, 59, who sat with Hernandez as he drank a beer, said he always thought Obama was a smart man.

“He is a brave man,” Dominguez said. “That, above everything. He is very, very brave,” Perez agrees. Perez, 44, used to work in a restaurant and would like to set up a paladar, a private restaurant. She said she liked that Obama had a meal at a paladar in Old Havana. “We know a waiter who served him,” she said. “He was so glad. He didn’t know whether to sit down or stand.”

Obama, during his visit, told Cubans he supports removing the trade embargo, but he said Congress must act to lift it. Perez said she wants the embargo lifted and would like both countries to start communicating and negotiating again to reach an understanding.

“Everything can be achieved with respect,” she said. “He spoke with a lot of respect.” Sabrina Valdes, 65, said she is surprised Obama cannot end the embargo. “How is it that a Congress is worth more than a president?” she asked.

Valdes, who said she didn’t pay much attention to Obama, said she owes many things to the Cuban revolution and stands by Fidel Castro. She is from the countryside, she said, and is about to retire.

The U.S. embargo, she said, hit the country hard since she was a child, and that’s something she won’t forget. She said she doesn’t mind not having freedom of expression, and that every country has its human rights problems. Cubans have free education and health care, she said, while some U.S. children go to school hungry.

But Lili Blanco has a different view. Blanco, Tabares’ wife who sells flowers with him, said Obama’s visit was a positive thing for the country. “People say he is good, that he is bringing good things,” she said.

Miami company the first U.S. business to open office in Havana Who is the photographer behind this photo
Scroll to top