HAVANA, Aug 23 (PL) Tropical storm Laura will leave today at noon at Paso de Los Vientos, gaining somewhat in intensity and approaching the eastern region of Cuba. According to the Forecast Center of the Institute of Meteorology of Cuba, this phenomenon hit the island of Hispaniola, shared by Haiti and the Dominican Republic, with heavy rains in the early morning.

In the next 12 to 24 hours, Tropical Storm Laura will maintain its course near the west-northwest, with a similar speed of translation and gaining in intensity, the report states.

This organism will travel during the morning over the northwestern portion of Haiti and will leave this noon to Paso de Los Vientos, approaching the eastern end of Cuba

Clouds and rains increase in the eastern region of Cuba, where the precursor bands of the system are already reaching.

Starting in the afternoon, winds with tropical storm force, between 60 and 75 kilometers per hour, with higher gusts, will gradually cover the eastern region of Cuba and storm surges will occur on the northern coast of this region with coastal flooding in low-lying areas of the north. from the Guantánamo, Holguín and Las Tunas provinces. 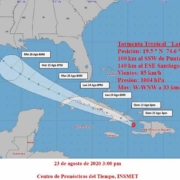 My shed is my castle: one Cuban’s move to self-isolate