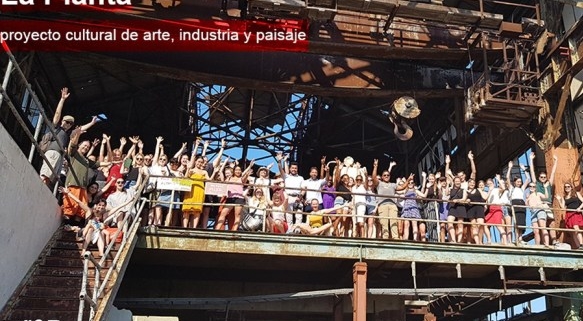 HAVANA, June 3th (IPSCuba) A development project seeks to encourage cultural creation processes and to rescue the architectural heritage of the Hershey sugar refinery, one of the most important examples of sugar industrial development in western Cuba, in the early 20th century.

The project is called La Planta: an arts, industry and landscape “AI&P” cultural project, an initiative that is being led by architect Renan Rodriguez.

Rodriguez founded the AI&P team, the Arts, Industry and Landscape cultural project, in 2008, which was then composed of two architects and an accountant. Today, La Planta has three more members, two women and a man.

As well as salvaging the town’s identity, it hopes to boost this picturesque town’s tourist appeal, which is located 50 kms to the east of Havana and was founded by US chocolate business owner Milton Hershey (1857-1945), which it was named after.

After the Revolution in 1959, it was rebaptized as the Camilo Cienfuegos Agroindustry Complex, this urban hub is famous for being the central station of the only electric railway system in this Caribbean country.

Since 1922, it has connected the towns of Casablance, in Havana, with the Versalles neighborhood, in Matanzas, with a 90 km-long route of rail tracks and power lines, although other branches connect to nearby towns such as Jaruco and Caraballo.

Known as the Hershey train, “it stands out in Cuba for its value of being able to expand the cultural landscape of the former sugar refinery that gave it life. It has taken on this purpose up until the present day, a social and economic platform for connecting with special tourist appeal,” Rodriguez explained.

The Camilo Cienfuegos facilities were dismantled in 2002 [on orders from Fidel Castro], like another 70 of these industries as part of a reorganization of the sector, which according to locals, “killed the Hershey sugar refinery”, which was the heart of town life and the lives of the 2,798 inhabitants who depended on the refinery.

According to the expert, there is still a lack of awareness about the “social and cultural meaning of industrial heritage for recovering the productive fabric of society”, and its potential for a network of tourism services that are being developed at nearby beaches in Canasi, Jibacoa and Puerto Escondido.

What are the main objectives of the La Planta project?

RENAN RODRIGUEZ: To contribute to the socio-economic regeneration of Cuban cities and regions where there was an industrial economy of the single-crop farming of sugar. In the specific case of the Hershey sugar refinery, the project will renovate the old Power Station (which has fallen into disrepair and been neglected for 18 years, by Mayabeque’s Sugar Company), and transform it into an Interactive Gallery to represent the cultural landscape and to contribute to local sustainable development efforts.

The project hopes to also become an attraction for Havana inhabitants, the main economic hub and the Varadero international resort in Matanzas, in their interrelationship with tourism, culture and nature.

What state or private players can contribute to this initiative?

RR: Self-employed workers and community leaders, who are backed by the Municipal Administration Council, the Local Development Management Group, the Mayabeque Sugar Company belonging to the Azcuba Sugar Industry Group and the Camilo Cienfuego Electric Railway Company. They are joined by members from the Culture, Heritage, Landscape, Environment, Agriculture, Economy, Tourism and micro-company sectors.

Bodies such as the National Council of Cultural Heritage, the Board of the Old Havana Historic Center Master Plan, the Physical Planning Institute, the Ludwig Foundation, the Antonio Nunez Jimenez Foundation of Nature and Man, Friends of Havana, as well as the International Committee for the Conservation of Industrial Heritage, have shown interest up until now.

Why do you say that this project will contribute to “resilient local development” and that it is “socially innovative”?

RR: It will strengthen socio-economic and environmental resilience, using cultural interventions that are closely tied to urban and architectural design: these might include actions such as soil recovery with permaculture actions, the solidary and circular economy, the installation of a creative production chain, models of socially innovative management and the preservation of industrial heritage.

It is socially innovative because the project understands the great scope of the landscape, via a transdisciplinary vision, especially the connection between art, industry and landscape. The balance between qualitative and quantitative research, and experimenting these using virtual and interactive platforms in a public space with different groups of players, both experts and the affected population.

What do you think about the alliance between public and private stakeholders in the project?

RR: The La Planta project’s raison d’etre is to make the local economy in Hershey more dynamic, cultivating values of local identity. The old Power Station is the perfect place to implement it, as it is located in the central area of the town and because of its historic value that locals have taken advantage of since it was founded in 1919. Social benefits create economic benefits.

The project will be self-financed, with its own resources and the collaboration of national bodies. The project’s management stands out because it involves individuals linked to the private sector, which is now recognized by Cuban legislation. This strategy of intersectoral alliances and the creation of new production networks will allow growth, recognition and a boost for the La Planta, AI&P, project, the business system, the towns communities and the region.

Could you mention some of the projects planned for the Interactive Gallery?

RR: La Planta is a Creative Industry. It will invite creators to take part in a museum and interactive artistic project, so as to share our ideas about art, industry and landscape, with visitors. We hope to develop high-quality products that contribute to urban and architectural renovation solutions, by understanding and conserving our natural and cultural heritage.

We hope to hold cultural workshops and have art installations linked to old industrial infrastructures and systems of productive green spaces; as well as taking a trip using virtual reality, augmented reality and 360° photos.

Meanwhile, we would like to devise a model of the Hershey complex using 3D digital models to interpret industrial heritage, as well as the industrial and natural heritage of the Havana-Hershey-Matanzas and Hershey-Jaruco railway routes.

We set out to establish thematic Trips about industrial infrastructure, the railway system, housing and the so-called Hershey Gardens.

There will also be cataloging, records and research work, so as to identify descriptions, drawings, photos and videos of mobile object, with textual information to support them.

None of this can be separated from the production of specific educational materials about our industrial history and its heritage, as well as cultural workshops specializing in methodological, theoretical and historic aspects of industrial heritage.

While communication is the focus, it will also stress the significance and value of industrial sites with publications, exhibitions, TV shows, the Internet and other platforms, thereby giving sustainable access to important sites and promoting tourism in industrial areas.

Wish I were there: Baracoa and the siren song of old Cuba

15 infections reported today, another day without deaths
Scroll to top